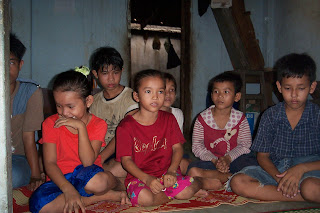 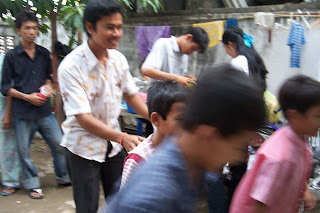 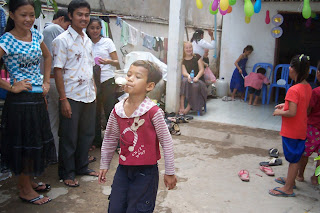 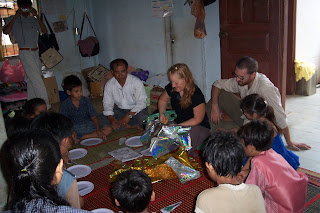 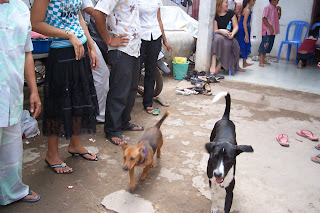 This is how the Bloom team spent Khmer New Year 2007. I had decided that all Bloom workers would take a day off from work to cook for and play with the children at a small orphanage I recently discovered. There was some drama prior to that day. I had told the team days in advance that this is how we would spend that day off, only to be told, as the day was approaching that so-and-so cannot make it because her brother will be in town, that so-and-so would be leaving for the province etc etc.

I was very annoyed and explained to the team that the day we were going to spend at the orphanage is a work day and I was giving them an extra day off specially so we can spend it with the orphans. I told them we're all lucky: we have families we can spend this special time with, and we have work so we have income and it is not too much to ask of the Bloom workers to think about their fellow Cambodians during this holiday. Actually, what I really wanted to say was "Why should I help all of you if you will not help your own people?" I was very disappointed with the behaviour but bit my tongue.

In the end, everyone turned up, even Get Ready trainees from Riverkids Project (the anti-child trafficking NGO that whose young women we trained in sewing). We even brought along Austin and Nessie, our dogs, who added a lot of cheer to the event. We had a great time, the women and our helper, Ming Wee spent the morning peeling, chopping, cooking and washing and we had Khmer curry with noodles, French loaves, stir-fried vegetables and fruit. We also played games with the children and I was glad Sareoun took time to plan the games and purchase the materials needed for them.

I had invited Jolene and Stuart, our Canadian friends to join us and Jo, an artist, taught the children to make New Year cards that they hung all over the small orphanage, called the Hope Orphanage Association. It is an incredible story. A Khmer man, an orphan himself, decided to start his own project, taking in kids from all over the country. As is typical in Cambodia, orphanages take in not only orphans but also children from poor families. This is why on this day, about half the children were absent--they had gone back to the provinces to be with their families. Sophon and I wanted to work more closely, through Riverkids, with this particular orphanage as we saw how they were struggling, but Sophon was concerned about separating children from their families. In Cambodia, you need to make sure you have the families' permission for this. I am sure, however, this orphanage has the gratitude of the parents, as they not only feed the children but also provide home tuition. I was told one of the older kids won a scholarship to study computer skills.
Posted by Diana Saw at 7:04 pm