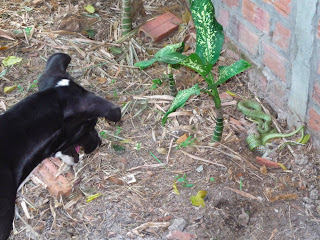 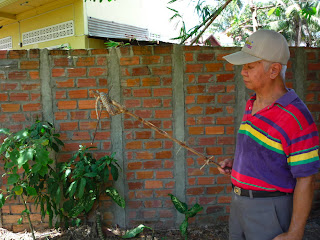 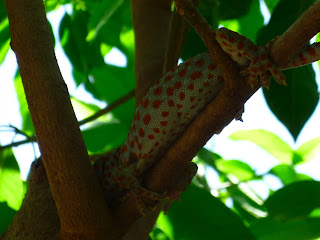 Austin was none too happy with the snake. He kept barking at it and the snake struck out once at him and once at Nessie. The dogs were so jumpy. It was quite funny to see them so nervous. Dad the hero -- he saved the gecko when he saw what was going on after he returned from a walk. He had used a stick, the one holding up the gecko, to prod the snake and it panicked and slithered away on a tree. The dogs got all excited chasing the snake. It didn't even occur to me to save the lizard. Actually, its cloudy eyes made me think it was already dead, suffocated by the snake. I just kept on taking photos and some short videos with my camera. Actually I felt a bit sorry for the snake. It was trying to have a meal for almost an hour, patiently trying to swallow the gecko, but in the end it had to give up. Dad then placed the gecko on a tree and we believe it survived, because it was nowhere to be found after a while. So Snake vs Gecko - Gecko wins! ... or at least didn't lose (its life).
Posted by Diana Saw at 8:49 pm