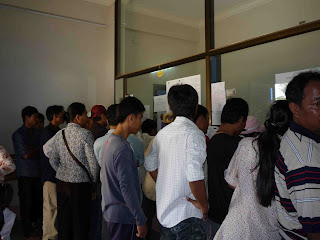 This morning we walked to the Electricite du Cambodge, or the Cambodian Electricity Department to pay our monthly bill. The deadline was yesterday (24th of the month) but you get a couple of days grace before the department cuts you off—at least, this was the case in Phnom Penh, when it happened to us. The bill was 219,760 riels or about USD55.

The small area in front of the counter was packed with laggards like us. I was trying to figure out where the queue was until I realised there *is* no queue. “Great,” I thought. “Just like China; we just have to jostle and shove the money at the counter staff. If you wait patiently for your turn, you’d never get served.” This was the case in 2000 in Beijing and Shanghai and I remember finally losing my patience at a man who pushed his way in front of me to get a ticket at the subway. I told him to please wait his turn as I was there first. He looked genuinely stunned, like it never occurred to him that there was such a thing as fairness and “first come, first served”. He did, however, let me go first.

It happened again to me last year at the posh shopping centre in Phnom Penh called Paragon. I had to tell off a Cambodian family to wait in line for their turn, and to explain to the cashier that she should serve whoever is in line first, instead of whoever shoves his or her way in front. I find queue jumpers very offensive, because their behaviour says they think they’re more important than the other people in the queue.

But this was not the case with what was happening at the Electricity Department. The people were just milling around. It took me about 5 minutes to figure out what was going on, as at first, I was just waiting for some indication that it was my turn. When it was apparent nothing was happening I made my way to the counter. The counter staff then asked me for the bill and the money, which she folded together and stuck under a pile of other bills that were also folded together with money. Ah, so this is the system! Hand your bill and cash over where it gets stuck under all the previous bills and cash and wait until the staff gets to yours.

So there is a first come, first served system. However, the problem arises when it is time for you to collect your change and receipt: how do you know which folded bill and money is yours? While I was there, the staff did not call out names or numbers. We were just supposed to know when it was our turn to collect the receipt. Very bizarre.

A problem happened when Chhun Hy paid the bill while I was away. It was very crowded, so the counter staff did call out the name and amount on the bill, but sometimes no one would come forward while other times more than one person would come forward. I can only imagine what happened: people do not know the name of their landlords (the addressee), or multiple persons paid the same amount and so assumed it was their bill. In Chhun Hy’s case, she refused to give him the receipt until he could prove that was his change and receipt by telling her the landlord’s name. Poor Chhun Hy had to go back to our house to get the previous month’s receipt in order to get the receipt from her.

As you can see, it is madness. I do not understand why there is no queuing system like anywhere else. If there is enough space to mill about, there is enough space to queue. All you need is one of those rope stands to organize the queue. Then you pay your bill, collect your receipt and leave. Isn’t this a better, less confusing system? The current system must have been thought up when there were two or three people in the queue (and it must have worked then) but obviously the system does not work when there are 30 or 40 people in line.

Could it be that no one has suggested a new way of doing things because the people who pay the bills are usually just runners? Educated Khmers who could suggest an improved system are probably not there to see it for themselves since the job of paying bills is usually left to flunkies. While I was there this morning, nobody complained or said anything. I did try to explain to the counter staff but as usual, I get a blank stare.

The other thing worth pointing out is we got back change of 200 riels instead of 240 riels. Apparently 40 riels is so little money it is not even worth having. Indeed the smallest denomination is 50 riels (a little over a penny, or 1.2 cents US).
Posted by Diana Saw at 1:44 pm