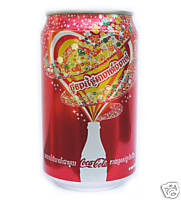 My partner and I are big Coke Light drinkers. We drink the stuff every day (I guess we're addicts!) so have become good friends with the shop where we get them every day.

A couple of weeks ago, the shop ran out of Coke Light. It only had Coke Zero, which tastes awful. The shop told us the company that bottles Coke in Cambodia has stopped supplying Coke Light until stocks of Coke Zero moves. A case of 12 Coke Light costs USD9, while Coke Zero is USD10. It was the other way around in Singapore where Zero costs less than Light.

We protested to the delivery guy from Coca Cola when we saw him and thankfully, our shop has started selling Coke Light again.

When we first arrived in 2006, we had a choice of two versions of Coke Light- from Singapore and from Thailand. The one from Singapore was more expensive. Because the supermarkets only sold the imported stuff, I assumed Coke Light is not bottled in Cambodia, unlike regular Coke.

I was surprised to learn that all the Coca Cola drinks are now bottled in Cambodia, but I don't know when it started. I did find it interesting that Coca-Cola was first produced in Cambodia in 1958, a few years after independence in 1953. From cocacolasabco.com:

Cambodia Beverage Company was established in March 1993 after an 18 year absence. CBC has one production plant, located in the capital, Phnom Penh, with capacity of 5 million cases.

In 2004, Coca-Cola Sabco bought a majority shareholding in Cambodia Beverage Company, expanding their territories into Asia and Indochina.

Since 1993, over US$12 million has been invested in the Coca-Cola business in Cambodia. The CBC team directly service 19,935 outlets across the country through the Manual Distribution Centre (MDC) model.

CBC currently directly employs 298 people and independent studies show that our business also generates a significant multiplier effect. For each direct job, our business supports up to 12 additional jobs in industries, such as ingredients, packaging, distribution and retailing.

The picture shows a Cambodian Coke can, which an enterprising person in Thailand is trying to sell for USD5.50 on eBay, plus a USD6 shipping charge!
Posted by Diana Saw at 6:32 pm

Argghh!! Me too-the adict part I mean. I wondered why it had become such a scarce commodity in the last two weeks especially since I knew that they had started 'bottling' coke light here. This happened in the pacific islands too. They just dont seem to get that a coke light drinker is not the same as a coke zero or for that matter a full blooded coke drinker. I have sent J an emergency text to see if he can have a word in P*****s ear as coke is a client.

Hi Tanya, so you are an addict like me! Although I am trying to wean myself off the stuff...I'm sure drinking it in the amounts I do is bad for health...!

Hello, i stay in Ho Chi Minh City (Saigon) and can't find Coke Zero in the whole country.It's a nightmare for me, because i'm adicted tooo. Somebody knows a way to find a solution? Best regads john