Very sad day for Cambodians. As if their lives are not hard enough, the rare chance ordinary Khmers - many from the countryside who come to Phnom Penh to watch the annual boat race - had a chance to rejoice and celebrate, they met with tragedy. The Guardian reported a policeman saying most of those killed were not people from Phnom Penh, but from the provinces who wanted to walk on the new Rainbow Bridge over the Tonle Sap, close to the festivities.
Fortunately none of the Bloom women was on the bridge but they were seriously depressed today when I spoke to them on the phone. I told them to take the day off. (I live in Siem Reap, so am far from the tragedy but our workshop is in Phnom Penh). Later I heard Kamhut's father and brother were injured on a bus going home from Phnom Penh to her province in Kampong Thom. The bus had got into an accident. Four million people were in Phnom Penh for the weekend celebrations but the organisers had only expected 2. Phnom Penh has about 1.5 million residents.
I called Kamhut and as usual she sounded happy and cheery but when I told her to take as much time away from work as she needs and to call me if she needs anything, she started crying. Kamhut is only 23. We are all hoping her family will be ok.
We don't yet know what caused the panic. The New York Daily News reported that a witness has said the stampede started when 10 people in the crowd fainted, causing others around them to panic. In an earlier Guardian article, a doctor said the two major causes of death were suffocation and electrocution.
Sean Ngu, an Australian who was visiting family and friends in Cambodia, told the BBC. "There were too many people on the bridge and then both ends were pushing. This caused a sudden panic. The pushing caused those in the middle to fall to the ground, then [get] crushed. Panic started and at least 50 people jumped in the river. People tried to climb on to the bridge, grabbing and pulling [electric] cables which came loose and electrical shock caused more deaths."

It also seems the police did not handle the situation well. CNN reported a Phnom Penh Post journalist as saying police began firing water cannons onto a bridge to an island in the center of a river in an effort to get them to continue moving across the bridge. "That just caused complete and utter panic," he told CNN in a telephone interview. A friend who has lived in Phnom Penh for many years told me that by the end of the Water Festival celebrations (when the tragedy happened), many policemen are drunk and so security can be lax.
I watched the news on Cambodian TV and took these images off Bayon TV. You can see the human crush. 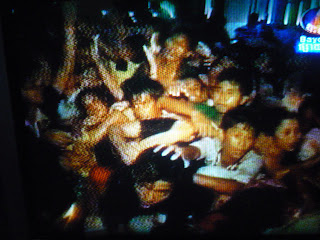 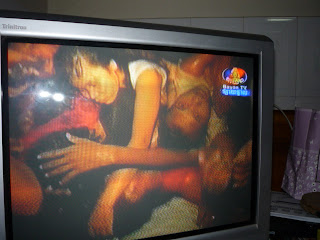 It was reported that two-thirds of the dead were women. The injured were laid down on the streets. 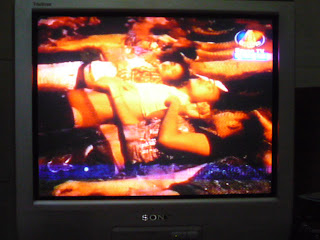 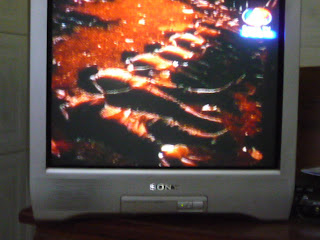 Those who were injured were taken to Calmette Hospital. The hospital could not cope, so people were laid down on the floor. 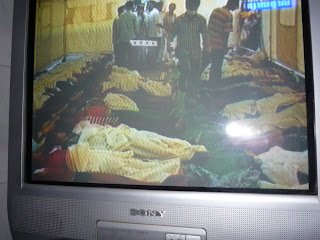 The dead were covered with white sheets at the hospital. 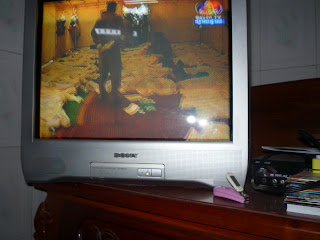 From another Cambodian news channel. The police were at the site today. You can see crowds at the scene. 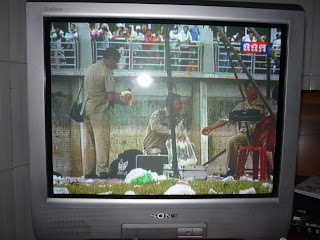 This is the bridge. 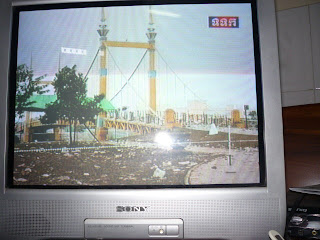 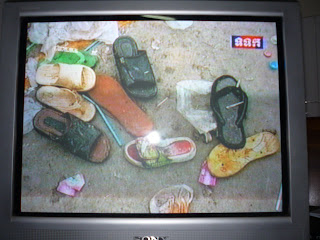 Interview with the man in charge 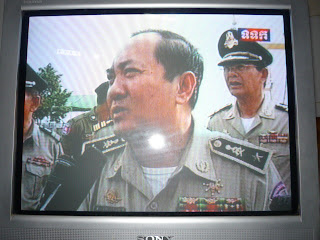 Bayon TV organised a donation drive for the victims. They were taking phone calls from donors and you can see this man on the right holding out a USD20 note to donate. 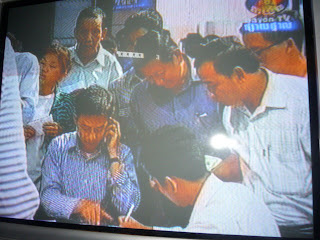 The Cambodian government has said it would compensate 5 million rielsm or USD1250 to the families of each of the dead and 1 million riels each to those injured. This man is announcing who donated and how much and thanking them. People were donating whatever they could. There were many for 20,000 riels, or just USD5, and from as far away as Banteay Manchey. 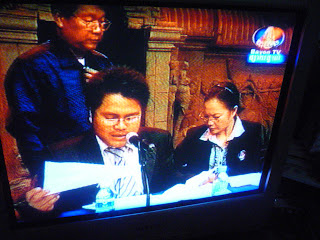 I want to donate too and will have a collection box for victims at the Bloom shop.  But how can I ensure whatever money me and my team and our friends raise do reach the victims? It sounds cynical but I am adamant the money we contribute does not do go to somebody's retirement fund.
The only thing I can think about is to find victims myself and hand the money over. So this is the plan. First we collect the money, then I will get the Bloom team in Phnom Penh to ask around so they find people in their provinces who were affected by the tragedy and we give them the money ourselves--directly. It may be a long shot, but maybe not, because people in the provinces are tightly-knit. I'm sure we will manage to find the right people to give the money to.

yeah, i am shocked by the news too. and your thought of donating to those suffered families is very appreciated. also, you are taking your time and effort to think of a more effective way to help. yeah, i am totally agreeing with you on this (as a cambodian, i have seen and learned about many scandalous aid-giving in this country). however, if you do it your way, please make sure to make the least bias as possible (those who you don't meet will not receive your donation...also, the suffered families include the poor and the poorer and the poorest...some families suffer from losing kids and some from losing father who in many cases is the only main pillar to support the living family...)
i know it is a hard task to do, even for aid specialist...but...yes, it is much better than giving to those officials who are likely to corrupt your valuable bucks :) thanks for your kind effort,