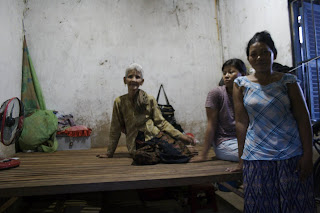 This is Neang, with her paternal granny and her cousin. I love the photo below of Neang and her grandmother. They have such character and are such strong women. I think Neang is very photogenic. She is the one who was working as a construction worker for 6000riels (about USD1.50) a day. I have written about her elsewhere because Neang is the one whose situation moved me most. She stayed in a hut made out of cement bag walls and had no electricity, water or a toilet. This is her new home in Chhbar Ampou, for which she pays USD22 a month. The entire room can be seen in this photograph and this is her home. You can see she has very few possessions. It looks dingy but believe me, it is steps up from where she was (you can see older photos of her former home on this blog). Here, in her concrete room, she is protected from the elements and she has a wooden bed frame to sleep on. She also has access to water and a common toilet and bathroom (shared toilets are common for poorer Khmers, often 6 or more people share a single toilet and bathroom) and importantly, she has electricity, which means she has the fan for the terrible April heat. She is another one who is always thanking me, and keeps telling me she loves her job as if she is worried all the time she may lose it. Neang's husband used to beat her, before he moved on to another woman, a friend of Neang's. She is 30 and lives with her grandmother. Neang has no children. Photo courtesy of Bloom customer Corey Torpie (www.coreytorpie.com) Update on 23 May: I just learnt that Neang's granny, the beautiful old lady in this photo has died. She died sometime in April, around Khmer New Year, so soon after we met her. It was a big shock to me. She looked well, although I'm sure she was not. That is the way in Cambodia. On average women live below 60 years and Neang's granny was 60-something. 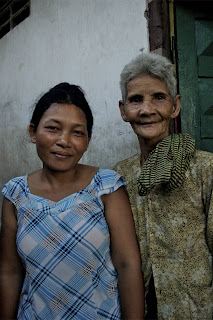 Hope you liked Corey's photos. They're great--I think they give such humanity to what Bloom is trying to achieve.