Cambodia, Singapore heatwave and the importance of trees

I haven't been inspired to blog, or do anything, really, in this heat. According to the BBC it is 38 degrees today here in Siem Reap. And tomorrow. And Saturday. (Friday will be 37 degrees...)

I was watching Singapore news on telly the other day. Feb 2010 was the driest month in history. It was also the month with the lowest rainfall in 140 years. According to the NEA (National Environment Agency), February 2010 also saw the hottest day - 35°C on Friday, 26th. The NEA explains "February falls in the dry phase of the Northeast monsoon season when the rainbelt shifts southwards away from Singapore." But experts also point a finger at the El Nino effect (the irregular warming of surface water in the Pacific) which occurs every two to seven years, and is likely to last until May.

Singapore is at the equator, so in theory, should be hotter than Siem Reap and Cambodia in general, as this diagramme explains. (The equator is hotter because the sun has less area to heat. It is cooler at the north and south poles as the sun has more area to heat up.)

I am not a climate expert but it seems to me Singapore is less hot than Siem Reap for a couple of reasons (it is 32 degrees today in Singapore, for instance). First of all Singapore is an island. Coastal areas are cooler and wetter (clouds form when warm air from inland areas meets cool air from the sea - climate explanations can be found here).

Secondly, Singapore has plenty of trees.


In fact Singapore is also known as the "Garden City" and it's Botanical Gardens was declared the “best urban jungle in Asia” by Time Magazine. Now the National Parks Board wants Singapore to be a "City in the Garden". There are plans for Singaporeans to walk, cycle or roller-blade around the whole of the island republic along verdant, landscaped paths without having to worry about motorised traffic. And there will be gardens in the sky, garden roofs and terraces, and greened walls. Amazing. I cannot wait for that day to come, which apparently will be in a few years' time.

Trees are sadly lacking in Siem Reap town and in Phnom Penh city.

Trees affect climate, and therefore weather, in three ways: they lower temperatures, reduce energy usage and reduce or remove air pollutants. Each part of the tree contributes to climate control, from leaves to roots. The diagramme below shows how leaves cool the air through evapotranspiration. A large oak tree is capable of transpiring 40,000 gallons of water into the atmosphere during one year. (Information and diagramme from How stuff works). 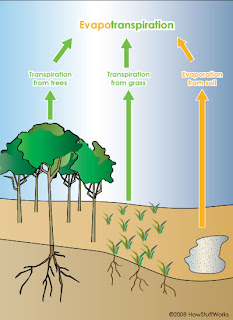 Of course Cambodian cities are not unique - planting trees just does not figure in urban planning for most Asian cities (just think of KL or Bangkok).

Andrew Sia of Malaysia's The Star newspaper noted in an article "Singapore: Garden Goals": "In most parts of the world, population growth is the oft-quoted reason (or excuse) for deforestation. Singapore has a land area of only 700 square kilometres. But between 1986 and 2007, its green cover grew from 35.7% to 46.5% (measured by satellite imaging), as its population leapt rom 2.7 million to 4.6 million."

You can see that taking action on climate change (and planting trees is just one small part of it) is a matter of political will.

Of course, appeals to global warming, and even comfort, are not going to move Cambodian government officials who live and travel in air-conditioned comfort (and so burn up more fossil fuels).

Cambodians are always telling me much they admire the Singapore government for its cleverness at making money. Well, as it turns out, green landscaping was part of a strategic plan to woo foreign investors. As reported by Andrew Sia:


“We had to make this a First World oasis ... Without having to tell anything to the (foreign investor) CEO, I knew he would understand that ... this is a country where the administration works,” Minister Mentor Lee Kuan Yew recalled in a dialogue during the 150th anniversary of the Singapore Botanical Gardens last May.

“You just can’t plant a tree and walk away. The tree will die ... If you plant under a flyover, you’ve got to get forest shrubs that grow in shaded areas. It’s complex (maintenance) that all people who run big organisations will understand,” he said.

In other words, landscaping was to be Singapore’s hidden “green trump card”.

So if Siem Reap town officials would like more investment, more tourists, consider drawing up a plan to have more greenery in town. For it's not going to happen on its own.
Posted by Diana Saw at 4:18 pm