Interesting Businessweek article. After Vietnam opened its doors to foreign investment in 1986, FDI went from zero to a peak of $60.3 billion in 2008.


"GDP grew at an average annual rate of 7.2 percent from 2000 to 2009, making Vietnam the fastest-growing economy in Asia after China and Cambodia, according to figures from the International Monetary Fund. The government forecasts GDP growth of 6.5 percent for 2010.

“Vietnam was viewed as the final frontier of Asia,” says Son Nam Nguyen, managing partner of Vietnam Capital Partners, who advised global investors on more than $30 billion in financing as the former head of Citigroup Inc.’s investment bank in Vietnam. “No one wanted to miss out on the next China.”

Instead, investors bought into a bubble as higher prices for commodities drove up the cost of living. Inflation peaked at 28.3 percent in August 2008. The central bank raised interest rates three times in 2008 to 14 percent to slow inflation.

Fed up, some are calling it quits. 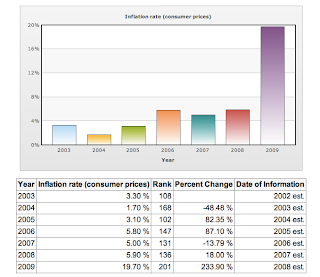 Cambodia is ranked 21st among countries with the highest inflation. Vietnam is 11. 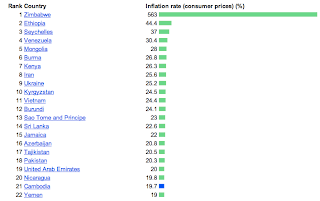 The ADB says food is the main driver of Cambodia's inflation, accounting for over 80% of the inflation between 2002 and 2008 and that food price inflation of this country closely tracks those of Vietnam and Thailand, more so than international food indicators.
Posted by Diana Saw at 5:41 pm