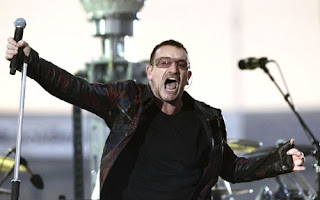 Figures from the 2008 tax returns of ONE foundation, the singer's organisation, show it received $14,993,873 in donations from philanthropists in 2008, of which just $184,732 was distributed to three charities. So what happened to the rest? More than $8 million was spent on executive and employee salaries.

In addition Edun, Bono’s fashion label, shifted some of its production base from Africa to China. Edun had position itself as an “ethical” fashion house that was set up to aleviate poverty in … Africa.

I posted this on my facebook yesterday and got some good comments from friends:

Mara: "We must ask these so called charities and NGOs what percentage of the actual $ go to their intended causes."

Steve: "Why don't we see stories like this about NGOs in Cambodia being held accountable? Maybe due to a professional courtesy from the local government? You know, like the way that sharks don't eat lawyers!"

Caron: "Do not donate to NGO's based in Cambodia unless you've done a lot of research into their funds accountability! Corruption is rife! NGO's are a joke! You want to make a difference? Do it in your own town first."

Diana Saw: "I am so glad my friends know the truth. This is why I dislike many NGOs - especially after living in Cambodia and learning these NGOs exist for the staff, and not for the people they are supposed to be helping."

Steve: "Even some (many perhaps?) large NGOs that do some really good and important work here operate without a level of integrity and accountability that would be acceptable in their own home countries. So much for setting an example, demonstrating leadership and investing in innovation. Instead there are massive exports of mediocrity and greed in much too high a proportion that come along with the good stuff."
Posted by Diana Saw at 2:44 pm

Bono's failed investment in Palm was greased by a deal selling the distressed company to HP.

The net was that Bono netted $500 billion plus...at the expense of the small investor and his 401k!

"Elevation Partners, the bicoastal private-equity firm famous for sort-of-rockstar investor Roger McNamee and actual rockstar Bono from the band U2, will probably see only a modest $25 million gain on its $460 million investment in Palm, according to the terms of an acquisition announced by HP on Wednesday afternoon."

But no doubt Bono is a wanker. Anyone remembers his hat flying first class?

"Three years ago, while preparing to perform with Luciano Pavarotti in Modena, the rocker discovered that he had left his black trilby behind in London. "Panic stricken," according to Italian press reports, Bono paid £1,000 to have it flown out to Italy.
Although the hat was given its own first class seat, the flight crew became concerned that it might get squashed, and moved it into the cockpit where it travelled alongside the captain. On arrival it was collected by a driver, and delivered to Bono shortly before the concert, which was being held to raise relief funds for homeless Iraqis."