Here in Cambodia, you can buy a number of beers from around the region. Besides the Cambodian national beer, Angkor ("My country, my beer", and the one we favour), you can buy Beer Lao (the national beer of Lao), Anchor (pronounced "An-cher" in Cambodia. If you say "anchor", chances are you will get an Angkor instead) and Tiger (both owned by Singapore's Asia Pacific Breweries). More recently, we tried this really awful one, called Zorok and made in Vietnam.

You can also get expensive Asahi (Japan) which at one time was the same price as Angkor. The Asahi we used to buy was made in Thailand, but then sometime last year, they stopped bringing it in, so you could only buy the Asahi that was made in Japan, so much more expensive. Why is the Thai made Asahi no longer available in Cambodia? Who knows? Somebody not paying enough to the right person? The market wasn't big enough? (hard to believe) 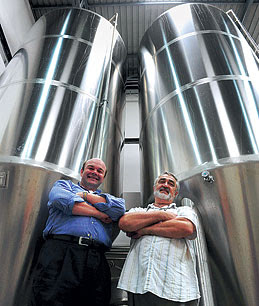 "Cambodia might not be counted among the world's most eminent beer-producing countries, but change is brewing. From its premises on the banks of the Tonle Sap, Phnom Penh's newest boutique brewer, Kingdom Breweries, is gearing up to give local brands a run for their riel — using only the best German and Czech hops, premium German malt and top-quality water to produce its flagship pilsner.

"Can I offer you one?" CEO Peter Brongers asks, proffering an ice-cool bottle of the first batch ever brewed. "Some of the locals might think it's too bitter, but I think it's perfect."

You'll probably think so too, if you like the crisp, light and dry style of European lager. Kingdom's bearded German brewmaster Peter Haupenthal is hoping to win the locals over with his product's body and consistency — important attributes in a town where microbrew is popular but varies wildly in quality, with poor heads, soapy textures and artificial colors (bright red or acid green anyone?) being not uncommon. After plenty of experimentation and patience, Kingdom has only recently arrived at the final recipe that it hopes will educate the market. "Unfortunately, making a good beer takes time," Haupenthal says, "and we can't speed up the process."

The fledgling brand will officially launch on Oct. 1, and visitors are welcome to observe the production process. Tours of the brewery can be arranged and include a chat with Haupenthal and a drink in the on-site bar, with its leather upholstered bar stools, studded Chesterfield couch and hardwood counter.

"When we launch in the market, we want to establish Kingdom as one of Southeast Asia's leading boutique breweries," says Brongers. Looks like Cambodia could finally be taking its place on the world's beer map. See kingdombreweries.com for more.
Posted by Diana Saw at 7:16 pm