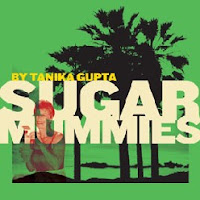 In today's Globalpost.com: Female sex tourism in Senegal attracts women who will pay for romance.

"Moussa flipped through a stack of photos. In one image, an overweight, Spanish woman — his first "girlfriend" — has her arms around his small frame. She gave him $500, he said, before heading home. Another photo is a self-taken shot of him with an Italian woman who he said gave him the $650 to open his souvenir shop in Dakar where we now sit, drinking spicy Touba coffee.

He pointed out the gifts tourists send him: CDs, USB drives, a guitar, an MP3 player and a DVD player.

“I don’t ask for money," he said. "We go out. They pay for everything. We have sex. Before they leave, they give me a bit cash to help me out."

Some call it male prostitution, while others say it's just women doing what middle-aged men have been doing for centuries: Taking up with someone half their age and giving that new friend an all-expenses-paid ride in exchange for sex and a new lease on life. [...]

But, others in Senegal say it is not that innocent. It's exploitation on both sides, they say, and sex tourism has sullied the country's reputation and corrupted its youth.

But, closing up his shop back in Dakar to head off to drum practice, Moussa said he's not worried about what other people think.

"I saw quite a few young men there with old, white women. I began to question my morality. What are you doing with this old woman? She could be your mom. You've become a gigolo, someone who doesn't have ambition, someone who is ready to do anything for money,” he said.

Years ago at a club in the Gambia, Pape saw a young man gyrating sexily in front of three old white women. One of the women reached out and patted his butt before shaking her head no, like it was a piece of fruit in the market.

"That memory comes back to me often lately," he said, stamping out one cigarette and lighting up another. "Once I find a good job, I will get my dignity back. But for now, I'm a prostitute."

According to Wikipedia, destinations for female sex tourism in southeast Asia are Bali, Indonesia and Phuket, Thailand. No mention of Cambodia, but of course it takes place here as well because of the wealth disparity between the locals and the visitors.

I have a funny story about a friend of a friend, a female sex tourist who likes to sample men from all over the world. This Dutch woman slept with a Cambodian man, a waiter at her hotel, while she was on holiday in Battambang. Later, she complained about his small size. We were amazed that she actually told the guy: "It's ok, don't worry. We Europeans are bigger, that's all." (I am sure she was just "unlucky" though, as other friends have told me otherwise!)

I also met a motodop (motocycle taxi driver) who told me about his Japanese "girlfriend". She came to holiday in Siem Reap for a week and spent one night in his family home. She told him she loved him and asked him to wait for her after she leaves. Meanwhile, he sends her emails but she is busy, he says. The Japanese woman takes about a month to reply to his emails. He said she has asked him to go to work in Japan but his mother does not want him to go. He will wait for her for 5 years, he told me. He has not seen her in a year and a half.

According to the wikipedia article, "Social reasons for women seeking promiscuous and no-strings-attached sex abroad include the dating war, as typified by extreme competition between the sexes in schools, the workplace, while dating, in marriages, and even in contentious divorces. The dating war appears especially to drive sex tourism by Australian and Japanese women, and to a lesser extent, German and Scandinavian female tourists."

In Singapore, Japanese women have a reputation for wanting "Sun, Shopping and Sex" while on holiday. I had heard how one of the bird trainers at a local attraction, the Singapore Bird Park, used to entertain Japanese women at the park--after hours of course. But there is a difference with someone like the Singaporean bird trainer who does not do it for the money and a man who feels a sugar mommy is his way out of poverty.

So we can make a distinction when Jeannette Belliveau, 51, a former sex tourist who remarried, and who wrote the book, Romance on the Road, says : "There is the view that these women are guilty of hypocrisy and that they are exploiting poor men. This is nonsense. Sex between two adults that doesn't harm either partner is without question a good thing." I learnt so much from it. It healed me after a painful divorce."

Sex between two consenting adults does not always mean no one is hurt. Just ask Pape from Senegal who said: "Once I find a good job, I will get my dignity back. But for now, I'm a prostitute."
Posted by Diana Saw at 5:40 pm