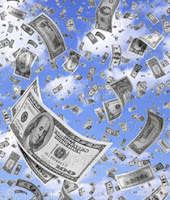 Since Friday 23rd April, one Cambodian has won US$10,000 daily! The lucky draw winnings are like nothing Cambodians have seen before and the daily broadcast of Cellcard Mobitel winners is the talk among my Khmer friends (I don't know why the Phnom Penh Post did not report this. Can't talk about the Cambodian Daily since the dinosaur does not even have a website.)

My Khmer friends in Siem Reap are peeved because they say the winners are all from Phnom Penh (I'm not sure if this is true). Kagna was so funny. She said one woman she saw on telly was super-excited and kept asking, "where can I get the $10,000?" But some other winners were not very impressed, leading Kagna to conclude that these people in Phnom Penh must be "very rich, so $10,000 not important for them".

We started talking about what we would do if we won the money and Kagna, who works with me in the Bloom shop, said she would give some to poor people, and put the rest in a bank. I said I would invest it in Bloom. And Ratha, a young woman working in another shop, said she would put everything in a bank. Kagna joked - why not share some with me?

So US$10,000 every day for 15 days, that's US$150,000 the company is giving out. At 15 US cents per SMS, Cellcard Mobitel would have earned US$150,000 if subscribers send a total of 1 million SMSs. But I don't know what it costs Cellcard to operate the service (or what the promotional activities is costing them) so I've no idea how many SMSs they would need to breakeven.

In any case, we need not worry for Cellcard Mobitel, owned by Cambodian tycoon Kith Meng, who is also president of the Cambodian Chamber of Commerce (pictured). His company made the news last year for winning a US$100 million loan from the International Finance Corporation, the private sector arm of the World Bank. "Our vision is that people should have the opportunity to escape poverty and improve their lives," states the IFC on its website.

According to this 13 March 2009 report by the Phnom Penh Post, "The IFC believes the US$100 million project will increase service coverage to 75 percent of the Kingdom's population by 2012. Mobitel reached 62 percent of the country at the end of last year, company data show."

Callcard is Cambodia's leading telecom operator by market share, with 2.172 million subscribers as of March 2009.

It is trying to ward off competition from the aggressive Metfone, the mobile service operated by the military-owned Vietnamese mobile operator, Viettel. Metfone attracted 500,000 subscribers in the first three months of its trial service.

Cambodia has one of the most competitive telecoms market in the world, according to Gary Foo, chief marketing manager of Hello, which is owned by Malaysia’s Axiata Group. He told Voice of America his company was facing its toughest competition since it arrived in 1997.]

“[Cambodia] is one of the most competitive markets in the world, actually, just because of the fact that there are too many players in the market,” he said. That has led led to a slowdown in new subscribers, Foo said.

(More than 4 million Cambodians use mobile phones, an increase of 1 million in the past year alone.)

And here is a hilarious blogpost comparing the service of the 9 telcos in Cambodia. It is translated by Google translate from Chinese so it is not very grammatical (the original Chinese version is here):

Metfone is the most progressive companies
Metfone 097 is Cambodia's major competition to provide mobile telecommunications company, first appeared in Cambodia, one year, 894.6 thousand in the people. It can be said to be "third boss", and its fee is not expensive. A Sim Card 3 $, out $ 2.5 to buy a Sim card.

Hello is the most backward companies
Hello 015 016 081 is a step backward Cambodia mobile telecommunications company, for a long time in Cambodia for years, with the same old Camsin, and now only 627.2 thousand people in the use of inferior Metfone. It can be said to be "the fourth boss", and its fee is not expensive, $ 0.07 per minute. Out to buy a Sim card 1$.

Is it make sense this way?