Selling to the highest bidder: story of the discovery of Sean Flynn's remains 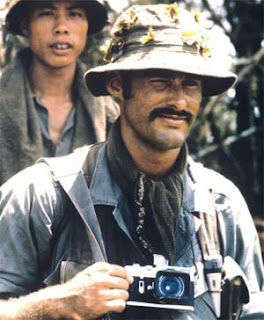 The remains [of Sean Flynn, son of Errol, pictured here] handed over to the US authorities in Cambodia were found by Briton Keith Rotheram and Scottish-born Australian David MacMillan more than two weeks ago. Reports say they were alerted to the location in Kampong Cham province in eastern Cambodia by a local man who claimed to have been a witness to the execution of a tall, blond foreigner. The witness claimed the foreigner had been forced to dig his own grave before he was battered to death.

The two men hired bomb disposal experts, a bulldozer and teams of local people to excavate the site in the village of Phka Dong, where they uncovered clothes, bone fragments and teeth. Contacted yesterday by The Independent, Mr Rotheram, who runs a guesthouse in the town of Sihanoukville, refused to answer any questions about the discovery, the full story of which, he said, would "be for the highest bidder"....

Yet the excavation of the site has been criticised by a colleague of the journalists who has led the search for them almost ever since they went missing. Tim Page, a British photographer celebrated for his work in Vietnam and other conflicts, said he believed a number of other foreign journalists may have been executed and buried at the same site...

"I have had hundreds of people contact me over the years about Sean and I'm always interested in what they have to say," Mr Page, who now lives in Brisbane, told The Australian. "But there is a very strict procedure to be followed when digging at a site of possible human remains, and in this case that has not been followed... It was not a forensic dig. They used an excavator and uncovered a full set of remains, which they removed from the site."

Photo and full story from independent.co.uk.
Posted by Diana Saw at 10:09 am