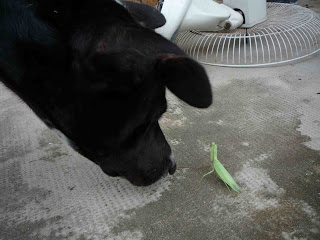 Austin found a praying mantis the other day. 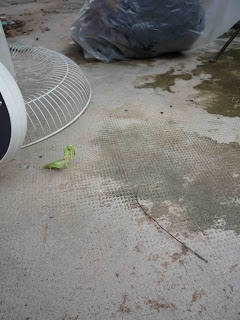 It's a funny creature. Look at it lifting its "wings", trying to look bigger. 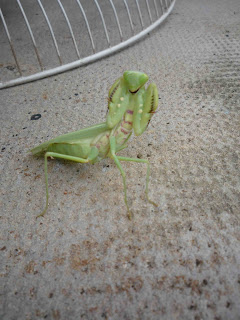 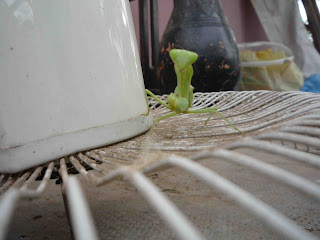 This is its face. Kindda cute. It's called a praying mantis because of the "prayer-like stance". This was what I found out from http://en.wikipedia.org/wiki/Mantis. More:
"Mantises are exclusively predatory. Insects form the primary diet, but larger species have been known to prey on small lizards, frogs, birds,snakes, fish and even rodents; they will prey upon any species small enough to successfully capture and devour. Most species of mantis are known to engage in cannibalism...
.
"The female may start feeding by biting off the male’s head (as with any prey), and if mating had begun, the male’s movements may become even more vigorous in its delivery of sperm. Early researchers thought that because copulatory movement is controlled by ganglion in the abdomen, not the head, removal of the male’s head was a reproductive strategy by females to enhance fertilisation while obtaining sustenance. Later, this behaviour appeared to be an artifact of intrusive laboratory observation. Whether the behaviour in the field is natural, or also the result of distractions caused by the human observer, remains controversial. Mantises are highly visual organisms, and notice any disturbance occurring in the laboratory or field such as bright lights or moving scientists."
Fascinating.
Posted by Diana Saw at 10:32 am