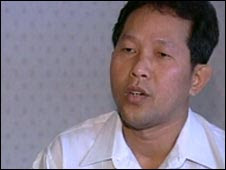 "A Cambodian-born accountant has been jailed for life in the US for plotting a failed coup attempt against the Cambodian government 10 years ago.

Chhun Yasith, 53, was found guilty by a court in Los Angeles in 2008 of four charges relating to the failed attack.

Chhun is a naturalised US citizen who fled Cambodia as a refugee in 1982.

He grew frustrated with the lack of free elections under Hun Sen, a former member of the Khmer Rouge under dictator Pol Pot, said Chhun's lawyer Richard Callahan.

"He saw Hun Sen as on an even par with Pol Pot," Mr Callahan said.

Chhun also wanted to avenge the death of his father, whom he witnessed being beheaded by Khmer Rouge soldiers, Mr Callahan added."

this is a bit much, lmao. so iraq gets bashed to death because saddam won't allow elections, but this poor bugger goes to jail because of the same thing? i probably don't know all the facts, but this stinks to high heaven!