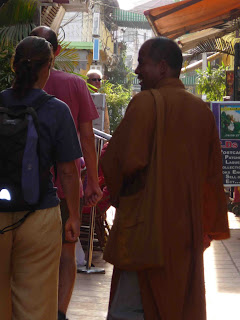 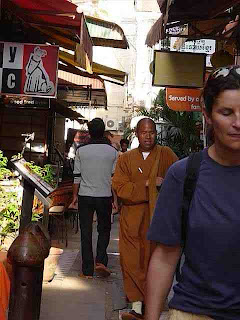 This post is to alert tourists of the fake monks walking about in the Old Market Area here in Siem Reap.

There are two of them now, dressed identically, in saffron coloured robes with matching bag. The older is pictured but there is a younger one. They are NOT Cambodian Monks. Cambodian monks do not wear these tunic like robes, rather, they wear robes that are wrapped around the body, with one end slung over a shoulder. These costumes are worn by Chinese, possibly Taiwanese, monks.

There used to be a woman in grey coloured robes, pretending to be a nun. She would always approach Alan, because he is white, and never me (the monks do the same). One day I confronted this woman, when she had the gall to follow us into the U-Care Pharmacy to pester Alan. I spoke to her in Mandarin, asking what she wanted. She replied in Mandarin, telling me about her lucky bookmark (which is what the thing she held up looked like). I asked her whether she is Chinese or Taiwanese and she said the latter. I then proceeded to tell her off: Why are you here trying to cheat tourists' of their money? Why don't you go home to Taiwan and cheat people at home?

She looked at me open-mouthed, and did not seem to know what to say. I walked away in disgust. The woman does not ply her trade her any longer, but the two Chinese monks do.

It is the same trick. They show you a gold card and say it is for luck. One day I heard a woman tourist tell the monk that she did not have USD20. USD20!! All he has to do is find a couple of mugs and he'd make over a thousand bucks a month (in a country where average wages are USD50 a month!).

I was so disgusted I immediately whipped out my camera and took these two photos. One day a customer told me she saw a tourist handing over USD20 to the monk. So there are actually people who fall for it. :(
Posted by Diana Saw at 7:16 pm