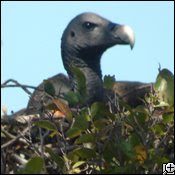 Feb. 7, 2007 - Researchers in the remote forests of Cambodia said Wednesday they have discovered the only known colony in Southeast Asia of slender-billed vultures and scores of other endangered birds. The colony was discovered last month in the jungles east of the Mekong River in Cambodia's Stung Treng Province....

The Slender-billed vulture is one of several vulture species in Asia that have been driven to the brink of extinction in the past 12 years after eating cattle carcasses tainted with diclofenac, an anti-inflammatory painkiller that's given to sick cows and is highly toxic to vultures....

Because diclofenac is almost entirely absent from use in Cambodia, the WCS said the country remains one of the main hopes for the survival of the species. Even so, the birds face numerous other threats, including lack of food due to the over-hunting of large-bodied mammals, loss of habitat, and poaching.