The Bookseller, the Cobbler and the Rubbish Collector 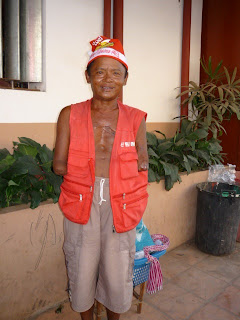 Merry X'mas says Douk the Bookseller! Douk has no forearms and scars on his chest, a victim of a landmine. To feed his family of four kids and his wife, Douk sells photocopied books to tourists. He also plays in a band at night, with sticks tied to his upper arms. Recently an Australian couple made a CD of Douk which he sells for USD10 - it sells quite well, I am happy to report. Another tourist left some books for him in our shop.

I took this photo of him yesterday when he dropped by our shop. Douk comes in now and again to see if we have sold any books for him, as we give him shelf space in the shop. I thought he looked cute with the hat so asked him to let me take a photo of him. 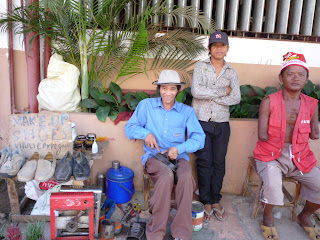 And here is Douk with our resident cobbler, who often brings a chicken, the family dinner, to work with him and who was once almost beaten up. Douk often hangs out with the cobbler, sharing snacks and cigarettes. The talented cobbler also fixes small gas stoves and you can see a couple in the picture. Chhun Hy, the young man who was manning our shop made the sign for Mr Cobbler. (Chhun Hy moved end of last month to work in Bloom's Phnom Penh shop at the Russian Market because he wanted to be closer to his brother who works in the city as a driver for the boss of a garment factory). The boy in the centre collects rubbish for recycling and is one of the many interesting characters in the Bloom neighbourhood.
Posted by Diana Saw at 3:11 pm