How to eat Jackfruit 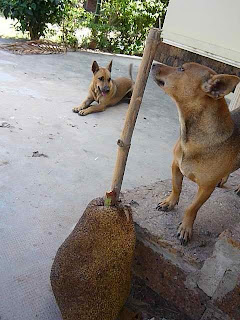 If you are a city person like me, you may be puzzled by the jackfruit. I was. I noticed we had all this huge, bloated jackfruit and I kept telling Alan we had to get them down - they look like they were about to burst. We chopped a few down but - they were not yet ripe! I opened one up and spat it out because it tasted raw: it was hard, tasteless and had this sticky feeling.

So we thought, maybe it is like other fruit, just leave it and it'll ripen. After about a week, the fruit started to go black and I panicked, so gave one to the neighbour and the two left to Phoen, the tuktuk driver. He said it was edible and tastes good when it was that colour. I asked him when was the right time to get the fruit down and he said you can cut the fruit down once the leaves around it have started to decay (you can see the dead leaf in the next photo). Our neighbour said we can pick the fruit once it starts to give off a sweet smell (jackfruit smells quite strong). But it was already smelling when I chopped it down. I guess it has to really smell before you can eat it.

Then the landlord came and chopped down a couple more. He left a giant one for us. He said we should eat it only a few days later when it starts to smell. Then he wedged a bamboo stick in the centre of the fruit. I think the bamboo stick was stuck in there to help the food ripen. By the way, that's Nessie smelling the stick and Buster looking on. 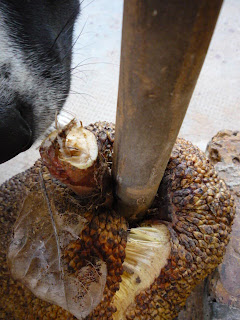 This is the top view of the stick stuck into the jackfruit. You can see the decayed leaf and the sticky, gummy jackfruit being pulled apart by the bamboo stick. (That's Austin's nose in there). 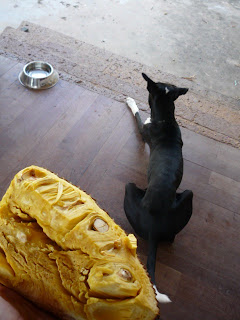 And this is what the jackfruit looks like cut open. The landlord first cut it in half, then quartered the two halves. You can see the yellow flesh and the seeds. The bit you are supposed to eat is the yellow flesh covering the brown seeds. I'll show you that in a sec. And that's Austin again. Don't you just love his white-tipped tail? He reminds me of Sylvester the Cat sometimes. 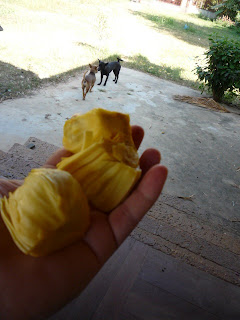 Jackfruit seeds and flesh. This is what you are supposed to eat, the flesh covering the seeds. Uncover the flesh and you will find oval seeds which can be boiled and eaten. They taste just like potato. That's Nessie and Sooty greeting each other in the background. 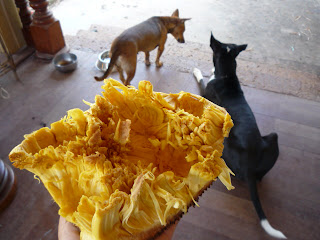 After digging out the seeds, you are left with this. The yellow flesh is short and stringy, but tastes just like the stuff covering the seeds, so I asked the landlord if it can be eaten - seems like a waste to throw it all away. He says it can be cooked in soups. I just picked at it and ate it. It's nice, but an awful lot for 2 people! In the end I gave most to Kagna, our shop assistant. And that's Austin and Nessie in the photo. They are our first 2 dogs. We'd adopted them in Phnom Penh in 2006 when they were mere pups and they braved the rain and sun with us on the 8 hour drive to Siem Reap in 2007. We had rented a lorry and whenever it rained, the driver would cover us with tarp and we'd huddle together. I love my dogs.
Posted by Diana Saw at 4:36 pm