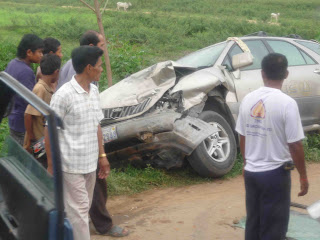 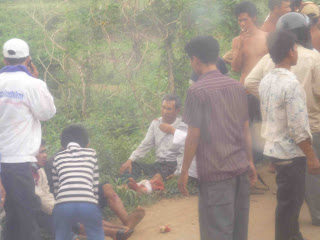 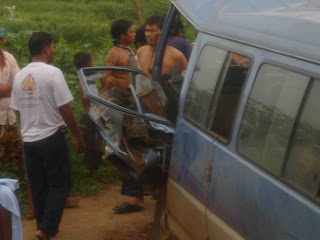 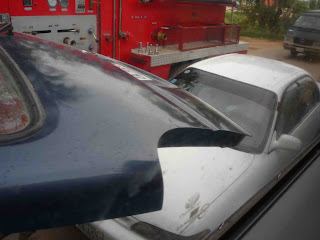 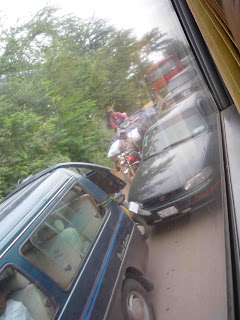 Cambodia is reportedly the accident capital of ASEAN.

I don't know which figure is right, as I also found this Xinhua article which states:

China recorded 5.1 road accident deaths for every 10,000 motor vehicles in 2007, the highest in the world [my italics], a source at the second China Traffic Safety Forum said. The world average was two deaths per 10,000 vehicles, the source added.

If China has 5.1/1000 road accident deaths versus Cambodia's 18, and if Xinhua's source is right, then it is Cambodia, by far, that is the World Champion. [Personally I think the figures quoted by the Mirror are more accurate, which makes me wonder why China is so keen to claim to be world champions--is it like Singapore, wanting to be first in everything?]

These are photos of an accident I took on the way from Phnom Penh to Siem Reap which caused a jam. To be honest, given the number of road accidents, I am surprised I don't see more. A year and a half living in Phnom Penh and I only saw one, a minor one, in which the persons involved were able to walk away from the scene. This was at the riverside. Another was an accident that almost happened because a motodop kept shouting at me, "Moto M'am, Moto M'am" and failed to see where he was going.

Motobike riders that got into accident were more likely to die (many riders don't use helmets, which complicates the problem). The fatality rate per 10,000 registered two-wheelers increased 32% from 2006 to 2007, while those involving cars went down by 7%, compared to 2006.

But perhaps there is hope Cambodia's road fatality will decrease in the future. Road fatality trends tend to follow Smeed's law, an empirical schema that correlates reduced injury rates with increased traffic congestion as measured by car ownership rates. The bright side of more and more Khmers buying cars over motobikes means the roads will be more congested. And cars can't kill you if they can't move.

But those slippery motobikes are a different story, weaving in and out of traffic. If only the government would do something to curb the number of motobikes in Cambodia's cities...
Posted by Diana Saw at 4:34 pm

Interesting article. I found the traffic disorganised and daunting at times, particularly in Phnom Penh.