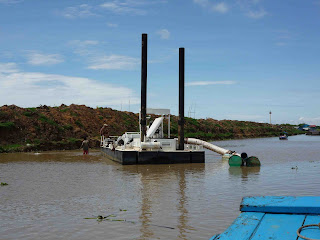 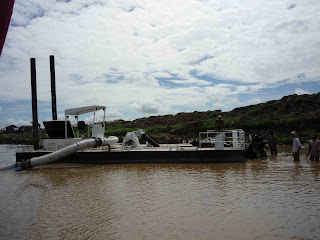 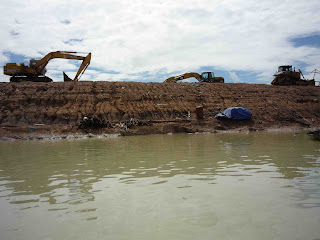 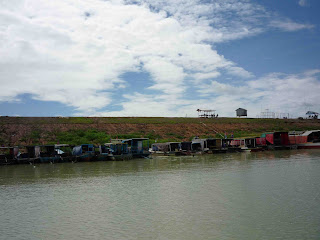 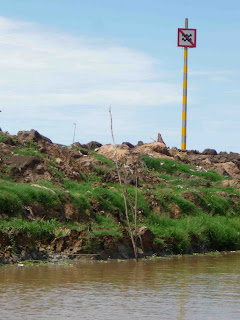 These photos show the work being carried out by the South Korean company Sou Ching Investments, which has monopoly rights to operate the Tonle Sap tours here in Siem Reap. The company reportedly will spent USD2 million to develop the area. Here you can see the dredges and the big bulldozers, the boats berthed by the riverbank and a sign that reminds boatmen not to speed (the symbol must mean "No Waves").

In May 2007, when Sou Ching first brought in the bulldozers, the villagers of Chong Kneas blocked the gates. They said it was the first they'd heard of the tourist port as the company did not talk to the people or the community leaders, according to this report by the Phnom Penh Post.

Back then, the Post reported the villagers were also afraid the port would damage the area's flooded forests and rice fields. Also, they worry the developer would block them from moving in and out or charge them a fee to access the river.

Resistance has now moved from the villagers to boat operators and the Cambodian Association of Travel Agents (CATA). [I could not find information on how the villagers were appeased--were they compensated or were their complaints and them just bulldozed over?]

"Some boat owners are also burned by the fixed pricing system, which prevents them from fleecing tourists.

Well, the tour operators are still corrupt , despite Sou Ching's claims that under its fixed-price system, tourists will stop being ripped off.

Is this a matter of a good idea ("one boat association and one price") executed poorly?

In any case, there is now a stand-off between CATA, which has 170 members, and Sou Ching. CATA members, like tour company Intrepid Travel, have agreed to boycott travel to Chong Kneas until Sou Ching meets with them.
Posted by Diana Saw at 2:03 pm

It's scams like this that make me hesitate to return to Cambodia. I paid US$15 per boat ride during my last trip to Siem Reap (2003) and even though I thought it was fishy (the "fixed price" part) I just paid because my guide said it was the correct price.

Fortunately, there wasn't this school visit thing then.

How much longer do Cambodians think they can get away with this? Sooner or later word is going to get out that the Tonle Sap boat ride is not worth the fleece.

As for me I'd rather go somewhere else in the region where I'm sure I won't be fleeced just because I'm a foreigner.

Yes, it is frustrating for me because Bloom is affected by this. Fewer tourists mean less business for us as well. Even though we try to do the right thing, the country's image as a whole is brought down by these idiots.

But the corruption starts from the top. I am reminded of something Mozi (Mencius) said: Benevolence comes to human beings "as naturally as fire turns upward or water turns downward", with one important caveat--provided that persons in position of authority illustrate benevolence in their own lives.

Cambodians used to be nice, but they have been corrupted by their leaders, by the system. It's a sad situation.