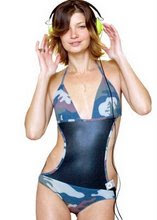 Woohoo! Surfkini just wrote about Bloom on its blog. Surfkini, founded by Annie Henley in Brooklyn, New York, makes the only surfing bikini designed especially for a woman. Pretty impressive, as the company was asked for its views on 2010 swimwear trends along with other giants in the swimwear business, including Billabong, Body Glove, O'Neill and Rip Curl.

Annie is also a board member of Rose Charities, which is how I came to know her. Dr William Grut, a doctor with Rose Charities Cambodia read this blog and was kind enough to put me in touch with Annie as well as some of his other friends. William recently gave an interview on acid violence in Cambodia and how the vicious, evil, attacks destroy the lives of its victims, some of whom are children. According to the Cambodian League for the Promotion and Defense of Human Rights (LICADHO), an acid attack occurs every 25 days--already shocking, but it seems actual figures may be higher since many attacks go unreported.

Rose Charities Cambodia was established in 1998 by one of the founders of Project IRIS eye program. I know about Project IRIS because the doctors operated on one of the Riverkids charges, a 14 year old girl who had to have corrective eye surgery. This work was done free.

Rose Charities, too, runs ophthalmic surgical, medical and optometric services in conjunction with the Cambodian Ministry of Social Affairs, at Kien Khleang National Rehabilitation Center, on the outskirts of Phnom Penh.

Rose has had a very challenging time in Cambodia. In 2002 it was looted and gutted by thieves but was able to reestablished itself through it the dedication of its staff members, directed by Dr Hang Vra. This is so touching: "Even after the clinic had been gutted by thieves, Dr Vra would come to attend the empty shell on his old motor-bike, just so the hundreds of poor Cambodians would be seen and comforted - even though all his instruments and medications were gone. He continued this, day in day out for weeks and months until finally he was able to start building it all from the beginning again."

Cambodia can be a very difficult place for people who try to help the country. I myself have been cheated by trusted Cambodian staff members. In one case, our manager inflated receipts and pocketed the difference, and stole our bags to sell to other shops around town. After being sacked, that person opened her own shop, selling the exact same Bloom bags as she had stolen all the templates. It wasn't the monetary loss that was upsetting, but the betrayal of trust. It makes you watchful, less trusting and worse of all for me, made me lose confidence in my judgement of people.

It is hard enough for a foreigner, but imagine what it must be like for a Cambodian who is trying to help his people and then gets cheated or robbed by his countrymen. I know one Cambodian director of an NGO who always looks mournful because jealousy from other Cambodian directors of NGOs operating in the same space as he (orphanages) means he's had to deal with a lot of backstabbing and ugliness.

But there are of course good Cambodian people as Dr Hang Vra exemplifies.

For me, it was the wise words of one of my best friends at home in Singapore that helped me get over the crisis and re-focus on Bloom. Leon told me, "Think of the objective good you're doing, and not of the subjective responses of individual Cambodians."

And this is what keeps all of us going. We know what we do makes a difference, even though very often it is a case of "Two steps forward, one step back."

Back to Rose Charities. Because it is run by volunteers, the charity has almost no overheads. This makes its operations incredibly cost-effective, restoring sight for as little as USD20 and repairing a cleft palate or make a child walk again for USD 50. I love what they say on their website: "We are just as cynical as you about how much of the donated dollar reaches its destination. (Have you read 'Lords of Poverty' by Graham Hancock?) We know exactly where our donations go and can follow each dollar right down to 'the field'." My thoughts exactly.

So if you'd like to share your time or money to help people in need of surgery to enable them lead their lives with dignity, please visit rosecharities.info and see how a little goes a long way.

In December, Annie and fellow model Noot Seear organised a fundraiser for Rose in NYC. "Be Bare" raised more than USD40,000. You can read "Models go bare for charity" or watch the Youtube video.

I am convinced that in the future, every business will have a social or environmental aspect to it and I am glad Surfkini has already set itself apart as one of these businesses with a heart.
Posted by Diana Saw at 6:00 pm