Americans more tolerant of torture than the Chinese 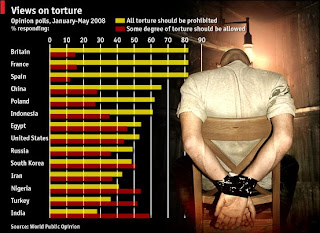 Chart from The Economist. This is very interesting. Democracies are not necessarily against torture compared with non-democratic nation-states.

The US, for instance, is more tolerant of the use of torture, compared with Indonesia, Egypt, Poland and China. Most against the use of torture are the Western European democracies such as Britain, France and Spain.
Posted by Diana Saw at 3:51 pm