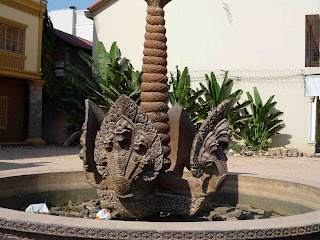 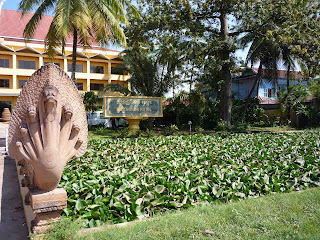 The Cambodian Naga looks different to other Nagas in India.
When I first researched Wikipedia's Naga entry, I thought I must have got the name of these sculptures wrong because the first few pictures on Naga look nothing like these.

But read on and you will see that in Cambodian mythology, the Princess of the Nagas, a reptilian race of human beings, married an Indian Brahmana and from that union was born the Cambodian people. "Therefore still Cambodians say that they are "Born from the Naga" (called "neah" in Khmer).

"Nāga (Sanskrit: नाग, IAST: nāgá, Indonesian: naga, Javanese: någå, Khmer: នាគ neak) is the Sanskrit and Pāli word for a deity or class of entity or being, taking the form of a very great snake—specifically the King Cobra, found in Hinduism and Buddhism. The use of the term nāga is often ambiguous, as the word may also refer, in similar contexts, to one of several human tribes known as or nicknamed "Nāgas"; to elephants; and to ordinary snakes, particularly the King Cobra and the Indian Cobra, the latter of which is still called nāg in Hindi and other languages of India. A female nāga is a nāgī or nāginī.

"The Seven-Headed Nāga serpents depicted as statues on Cambodian temples, such as Angkor Wat, apparently represent the seven races within Nāga society, which has a mythological, or symbolic, association with "the seven colors of the rainbow". Furthermore, Cambodian Nāga possess numerological symbolism in the number of their heads. Odd-headed Nāga symbolise the Male Energy, Infinity, Timelessness, and Immortality. This is because, numerologically, all odd numbers come from One. Even-headed Nāga are said to be "Female, representing Physicality, Mortality, Temporality, and the Earth."

Nice posting. Do you know about these Sanskrit books?