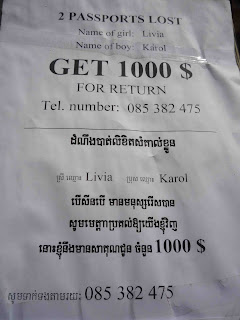 I saw this sign a while back. I guess two tourists must have lost their passports in Siem Reap.

I tried to find out how much stolen passports are worth on the black market and found this July 5 report Alarming Rise in Stolen Passports from Ireland's Tribune News.

Apparently Canadian passports are the most in-demand, with the Irish coming in on a close second. More than 5,000 Irish passports were reported stolen in 2008.

Once a passport is stolen, it is passed on at a very minimal fee of between €30 (around USD43) and €40. It is then sold to what are known as "trade contacts" who buy the documents for between €300 and €400. The passports are then shipped abroad and sold for an estimated €2,000-€3,000 on the international black market.

This British report from the Centre for Immigration Studies says there are about 7 million records of lost and stolen passports in INTERPOL and other databases.

Cost of passports
I was told a Cambodian passport costs around USD130, a sum out of reach for the majority of Khmers. It will take a month to get the passport. If you need the passport urgently, it will cost USD220 and this will take a week or so.

For comparison, this is how much a passport costs in other countries:

These figures are shared by posters here.

In Singapore, passports used to cost $60 (less than USD40) for 10 years. It is now it’s $70 for 5 years, so a more than 100 per cent increase. The Immigration & Checkpoints Authority blames the higher cost on the new biometric feature, and the shorter time-frame on "new technologies" which the department hopes to be incorporated in the Singapore passports when they are available.
Posted by Diana Saw at 2:43 pm