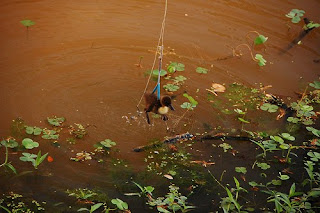 I came across this really cute story by Mendhak and I wanted to share with readers. Mendhak writes:

"I passed some fisherman by the Siem Reap river, who had this duckling hanging from a fishing pole, and a hook behind it. He'd dip the duckling in the water, who would immediately start paddling to get away. The paddling would churn up the water which would in turn attract the fish who then got caught on the hook. I don't think the duckling was liking it very much.

Eat the bird in future!"

What a moron. Of course the fisherman will eat the bird - as well as the fish. And people say Cambodians think short term.

Well, this is where a Cambodian fisherman in "a desolate 2nd world hellhole" is smarter than adamneilward, who no doubt considers himself a product of the "first world".
Posted by Diana Saw at 11:31 am

Thanks so much for posting this! I saw people doing this in Takeo province and always wondered what they were doing ;)