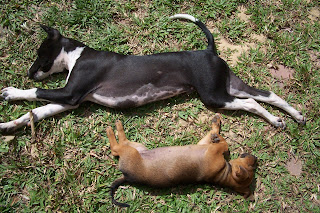 It’s been more than a month since the last entry and so much has happened. In summary, puppy Austin almost died; we welcomed a new puppy, Nessie; and thanks to my wonderful friends at Riverkids (www.riverkidsproject.org), Bloom made its first major sale less than 3 months after operation. Phew! 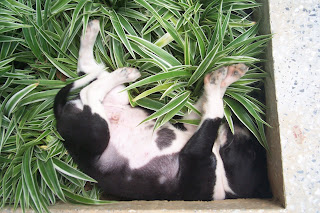 Austin is now 6 months old. He was very sick a month ago and we nearly lost him to a canine disease very common in Cambodia. At first he was just sleeping all day and lost appetite. We thought he had simply eaten something bad. On day three, I noticed him coughing up a little blood and that’s when I panicked. We immediately took him to the vet who first diagnosed him with distemper. Subsequently, the vet told us the illness was actually Parvo virus. It was very depressing to learn on the Internet that there is no cure for the disease and affected puppies have a 50 per cent chance of survival. The virus attacks the lining of the digestive system so puppies cannot absorb nutrients or liquids. It is highly contagious and Austin’s pal, the furry black puppy who lives just a few doors away across the road died just 2 days after showing symptoms. We still do not know which dog first had the virus and how they got it. A week ago, we had brought Austin for a long walk to Hun Sen park for a run (Austin really loves to run, and he has very long legs, very coltish) and we thought perhaps he got infected along the way. I was very depressed at the thought of this: how in this town, you cannot even take your dog for a walk without it picking up a disease, because it is just so dirty, literally, with rubbish and dog poo almost everywhere.

In any case, Austin was put on a drip for four days continuously and had antibiotic shots. Six days after visiting the clinic, run by three very kind young Cambodian men, Austin got well. My advice to everyone with a puppy is please, please, remember to vaccinate it when it is old enough (6 weeks according to info on the Net). It was terrible seeing Austin suffer and although we had not told each other this while Austin fighting for his life, Alan and I had each secretly decided that if Austin dies, we would pack up and go home because it would just be too much. Cambodians, though, are used to puppies dying and our neighbours and housekeeper were rather blasé about the death of Austin’s pal. I can understand this, because the vaccines cost USD9 and each IV treatment, USD6—a lot of money for most locals. In a country where human life itself is cheap, what more dogs? 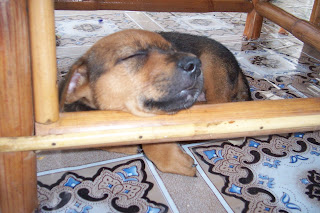 A week before Austin fell sick, we were given a puppy by our friends at Riverkids. Nessie is a very cute dog and soon displaced Austin as the favourite among the staff at Bloom. Alan and I are very conscious of this and we really try to make Austin feel loved. In terms of temperament though, Austin is the sweetie. Nessie was named after Vanessa (Austin Powers’ girlfriend in the first show). She is a right little monster, and the name “Nessie” (as in the Lochness Monster) fits her. She is very fierce, and enjoys snarling and pouncing on Austin when they play. Exposed to Austin, the vet said Nessie contracted Parvo as well. Fortunately, she was still young and had the maternal antibodies that protect her from many diseases. She was only given some antibiotic shots and thankfully, is healthy and full of energy. The two dogs bring us much joy in this foreign land. ☺ 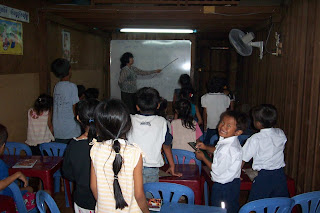 Bloom—the reason I am here. Bloom has been doing well, thanks to my incredibly supportive friends, Jimmy and Dale, who run their own project here in Phnom Penh, Riverkids. Riverkids is a project that aims to stop child trafficking in Cambodia. There are parents here who sell their children, usually for a few hundred dollars. These children are usually bought by middlemen/women who go on to sell them for a profit. The children could end up in brothels or adopted by foreign parents. The situation is so bad that countries such as the US and the UK have banned adoptions from Cambodia because of the possibility that the child could have been trafficked. You can read more about child trafficking and the work that Riverkids does on www.riverkidsproject.org. I should also declare in the interest of transparency that I am on Riverkid’s board of trustees. Riverkids is in the process of being registered in Singapore as an international NGO and we have great hopes that it will make a difference to the lives of some children here. It already has to some 55 kids who receive food, school and shelter at Riverkids.

Anyway, back to Bloom. Riverkids needs money for its programmes next year and Dale decided to sell Cambodian fair trade products online as a way of raising funds and more importantly, awareness. Bloom is one of the suppliers on the site www.shop.riverkidsproject.org. Dale tells me the site has been very successful not just in getting buyers, but in that people who buy often also make a donation to the cause. It is nice to know that there are so many people out there who care about others and that the products they buy make a difference to the lives of those who make them. The staff at Bloom worked very hard to get the orders out on time, working on weekends and at home after work hours. For this extra work, I pay the women per piece, calculating that it allows them to make more. I have been very happy with their performance and everyone is getting a pay rise this month, as they have all passed their probation, after 3 months. As the orders have slowed, at the moment, we are working to make prototypes of bags and home furnishing accessories. We are now working on a whole range of bags made out of recycled rice feed bags.
Posted by Diana Saw at 9:35 am