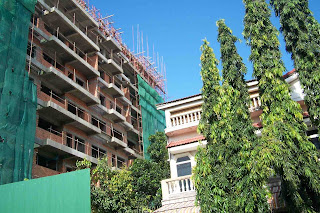 "Since Cambodia is still a very poor country that has never seen so much investment capital flying around, the trend is unnerving some observers. "Where is the money coming from? Cash coming out from under the mattresses, cash coming from overseas," says John Brisden, vice-chairman of Acleda Bank, the largest bank in Cambodia. He calls the real estate boom "very unusual" because much of it is not being financed by bank loans. Are there signs that the boom may be running its course? Brisden doesn't see a sudden popping of the bubble. Instead, he says, "people envision a slowdown. The scenario is a lot of empty high-rise properties but no forced sales." Businessweek

I met a woman in Phnom Penh whose landlord sold the Sisowath Quay property for USD3.5 million last month. This woman ran a fairly large restaurant on his site and had to move. USD3.5 mil! How can the buyer think he can make back the money? Cambodia's average income is still USD50 a month.

To me, property prices here are driven by speculation, and are not grounded in reality. When there are empty high-rise properties, it will cause a ripple effect, driving down rents and sale prices of other properties, affecting the entire economy (see how home prices have affected the US economy now)--even if as the Acleda Bank guy believes, there will be "no forced sales" of those high-rises owned by the filthy rich.

This same woman also told me how her landlord got to be so rich, basically by squatting in villas that were empty after the war. After the Khmer Rouge were defeated, people started straggling back to their home towns only to find them deserted and destroyed. Those who squatted are benefitting now. The sad thing is this Khmer woman blames her father, "a true communist", she said, for not being clever enough to grab more property when others were doing so. She believes the land grabbers are the smart ones, whereas people like her father, who concentrated on building the country after the war, are the stupid ones--working all their lives for "nothing".

Tragic. It is just like my family back in Singapore and Malaysia who think: if you are so clever, why aren't you rich? And conversely, if you are rich, you must be clever. To me, clever are people who come up with a medical cure, or invent something useful--not people who become rich by accident or by cunning. But it is a sad fact, as one of my Khmer friends confirmed. His family blames him for taking on an NGO job that doesn't pay as well as a job in a private company. My friend does it because he is kind and wants to help his country, but gets no thanks from his family.

"The Phnom Penh skyscrapers, which will be more than three times higher than the tallest existing building in Cambodia, are the most dazzling projects. And the most controversial. The developer of the $240 million Gold Tower 42, Yonwoo Co., expects construction to take three and a half years to complete. Already, says Teng Rithy, sales manager for Gold Tower 42, "high-ranking Cambodians and some foreigners from other Asian countries" are plunking down deposits. "We are 80% sold out," he boasts.

"But residential skyscrapers are a new concept in a country that not too long ago was still giving away property, not trying to market a 40th-floor condo for $1.6 million. "I feel it's a little bit early for that," says Sung Bonna, head of Bonna Realty, one of the leading real estate firms in Cambodia. "They said it's going to be a success. But I don't know. If it doesn't happen, it is not good for us."

"Bonna says the whole idea of a real estate market in Cambodia is so new that no one can predict how it will turn. "We used to share property, not sell it. After the Pol Pot regime, however many properties you want, you can take all of them." He says there is a need for more modern restaurants, office buildings, and commercial centers, but the supply and demand for residential properties is in balance."

Update: June 7: I just saw this message on khmer440.com

My sentiments exactly.
Posted by Diana Saw at 1:51 pm