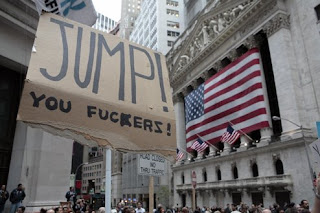 Some New Yorkers are getting fed up with Wall Street bankers. They also planned a day (Thursday, 2 days ago) to dump their crap in front of the Bronze bull scuplture on Wall Street to protest the USD700 billion bailout. Read more on www.alternet.org

I remember when 9-11 happened I mentioned at work, "Well, if 3000 people are going to die, they might as well be investment bankers". (of course I do know many of the 3000 were ordinary cleaners etc, but I was talking specifically about the Wall Street bankers). That drew fury from a Christian co-worker who said "Who are you to judge? Only God can judge who should die!"

It now appears I am not the only want who think investment bankers and their ilk are better off dead than profiting from the misery of ordinary folk. They get huge bonuses even as they screw up the companies they run - and these are just the CEOs.


Sept. 26 (Bloomberg) -- Wall Street's five biggest firms paid more than $3 billion in the last five years to their top executives, while they presided over the packaging and sale of loans that helped bring down the investment-banking system.

Merrill Lynch & Co. paid its chief executives the most, with Stanley O'Neal taking in $172 million from 2003 to 2007 and John Thain getting $86 million, including a signing bonus, after beginning work in December. The company agreed to be acquired by Bank of America Corp. for about $50 billion on Sept. 15. Bear Stearns Cos.'s James ``Jimmy'' Cayne made $161 million before the company collapsed and was sold to JPMorgan Chase & Co. in June.

Meanwhile pensioners and the ordinary American citizen have to help fund the proposed USD700 billion payout. Simply disgusting.
Posted by Diana Saw at 7:02 am