"When asked if I am pessimistic or optimistic about the future, my answer is always the same: If you look at the science about what is happening on earth and aren’t pessimistic, you don’t understand data. But if you meet the people who are working to restore this earth and the lives of the poor, and you aren’t optimistic, you haven’t got a pulse." - environmentalist and entrepreneur Paul Hawken.

I have been in touch with Marcus, a young German man, whom I met in Cambodia when I took his Insead class on a tour of Cambodia's social enterprises.

He wrote to me in August to tell me he was volunteering to set up a social enterprise hotel in the small town of Port Barton on the Island of Palawan. 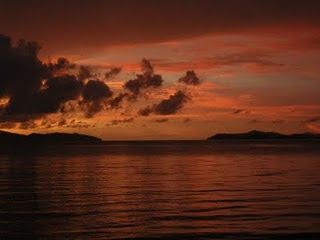 Marcus kept a blog, marcus-palawan.blogspot.com, for his short stint on the island (Paul Hawken quote and sunset photo both from Marcus's blog). It is interesting how many of the challenges in the Philippines are the same as in Cambodia. Here is an excerpt:


We're trying to get a frenchman living on one of the neighbouring islands on board to help us with the redesign of the hotel. He currently fights his own fight against the tourism development, has the local government and corporations try to evict him from the island to build large scale hotels. There are a million reasons why that is not a good idea (like some species only exists there) and a handful of laws that actually prohibit any development there. But still the process moves along happily. In an email today he described the philippines as "a country where greed and corruption are not part of the system, but are the system." Somehow that seems to fit some of the stuff I am observing.


The people trying to throw the Frenchman off the island are also responsible for logging - there's a surprise. Never content, the rich and powerful always have their fingers in more than one pie.

Another concern for island life is of course marine life. Marcus writes:


"Dynamite fishing in the last decade, now cyanide fishing. I would like to work with the local community and tourism businesses to set up a "no-take marine reserve", i.e., a zone where any form of fishing is not allowed and, better yet, access is controlled. This would reserve some space for corals and marine life to exist, which would benefit tourism and the fishermen alike (so called spill over effects). I'll try to talk to a dive operator (the last one in town, all the others are gone because the diving sites have been destroyed) tomorrow. She has tried this effort before, but hopefully with another hotel saying that we need a no-take zone, plus educational efforts in the community, we might be successful in a year or so."


It was funny to read how the locals try to befriend a foreigner the moment they can. Marcus made the mistake of giving his phone number to a teenager and one day received 12 missed calls from him. Another time he found this note on his bag when he left it at a check in counter at a shopping centre: 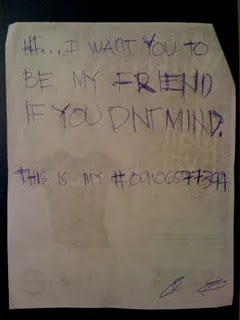 He writes: "As much as I would like to believe that the security guard would like to be my friend because of my character, style, and because he whole heartedly agrees with my views about how to protect the environment in this country, I somehow don’t think that’s the case. Probably more some joke like the one I experienced earlier. Or he’s trying to get money. Of which foreigners, as we all know, have endless supplies." LOL.
Posted by Diana Saw at 1:41 pm

Many people travel to Palawan to experience its magnificent view and the beauty of nature around the area. There are various Palawan Resorts that attracted tourists and visitors which must keep clean and guarded all the time.