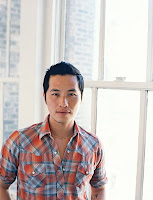 I just learnt from this LA Times article that designer Phillip Lim is Cambodian. Quite sad to read about his relationship with his mother who smuggled her children out of Cambodia in 1975.


"Lim has never invited his mom -- or any of his family -- to his runway shows. Or told them how much his clothes cost. (His line falls in the contemporary category, so most pieces are less than $1,000.) His mother only recently learned that his work has been featured in magazines when a French relative phoned her after seeing his name in Jalouse.

"LIKE so many immigrant children who don't go into professional fields, Lim thinks he's disappointed his parents, for whom going into fashion was on par with becoming a small-time seamstress.

"Even now, more than 30 years later, she tears up talking about the summer of 1975 when she and her late husband Pary escaped from Cambodia in the middle of the night, huddled in a boat with their six children who were all under the age of 13. The Lims are Chinese, but their ancestors migrated to Cambodia after Japan invaded. When Pol Pot took over, "I was afraid he was going to draft my boys as children soldiers," Hannah says, as her daughter Lisa translates. They escaped to a refugee camp in Thailand, where a Christian organization sponsored their move to San Diego. Pary worked odd jobs while Hannah sewed simple garments at home for 5 to 10 cents apiece."