Lois and I cycled to the Old Market today. Along the way, we decided to get some air pumped and the chain checked. Lucky us! We found this man and his son in a small lane just beside the Angkor National Museum. 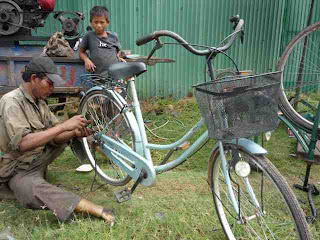 I don't know if you can see it from this photo, but the Cambodian man is a double amputee. 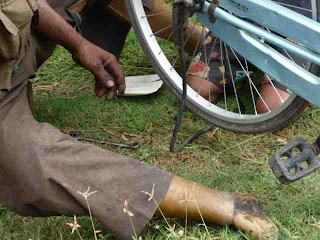 This photo makes it clearer. He has these plastic legs, which an NGO provided. It was in 1983 that he lost his legs. He was 16 years old, a boy soldier, when he stepped on a land mine. He is now 43 years old and has taught himself to fix bicycles. He was also teaching his son what to do, so his son can learn the trade, although he said he'd prefer it if his son could do something else as you don't make a lot of money repairing bicycles. 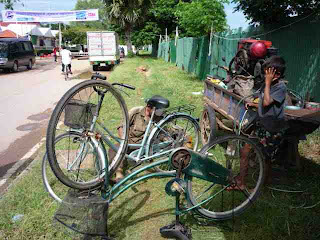 He is usually under the big palm tree just beyond. It is in the lane beside the museum. He moved today because there is a fair going on at the museum but usually he is under the tree. 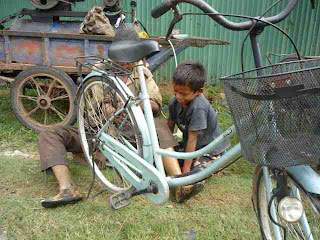 Father and son. The man has 5 children and he and his son have very good chemistry. The son obviously loves his dad, which I take to mean he is a good father. To oil and tighten the chains and pump air, the man asked for only 1000 riels (25cents US), which is the Cambodian price. I was very happy he did not try to cheat us, as Lois is obviously a foreigner. I gave him a dollar, which I was prepared to do even if he'd asked, because I admire and respect him for earning a living instead of begging. Having said that, I stopped my bike on the way back just to give a very old man money because he looked so destitute. I think there are circumstances where a person has no choice but to beg, for instance, when you are very old and cannot find employment.

The boy's eyes widened and both father and son said thank you. I promised I would send all our bicycles from the guesthouse to him for repair. Lois also gave his son some money as she was touched he did not try to cheat us. See, it pays to be honest, Cambodian merchants!