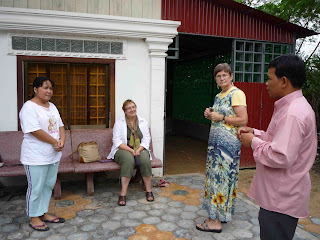 I met these two lovely women, Pat and Susan, who are from Wisconsin, USA. They've have been to Cambodia a number of times to help Khmer women through their church. They told me about a Khmer woman, Chariya (pictured) who wants to provide skills training for poor women in her neighbourhood. On this trip, Pat and Susan taught the women to sew bags and school uniforms. 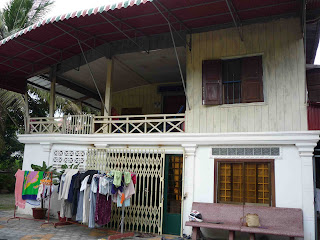 At first I was sceptical when I saw Chariya's house--she is obviously not poor, so would her neighbours be poor? It turns out some of the women who learn how to sew at Chariya's house are actually homeless, she says, and they live by the roadside, in tents. I think it is great that Chariya is helping her own people. I bought some woven bags from her to sell at the Bloom shop. Hopefully they will sell so I can buy some more. 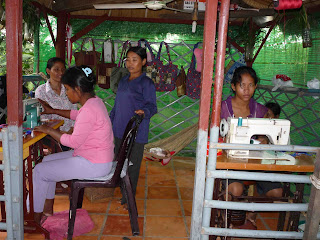 These are the women. It is a small group and those are the bags pictured below. I had been thinking of setting up a workshop in Siem Reap, but maybe this is a good alternative. Instead of starting my own Bloom workshop number 2, I can work with Chariya's group. I plan to send up one of the experienced Bloom sewers to come to Siem Reap to train Chariya's team. That way they can make bags for Bloom, to the same standards and quality. I hope to be able to do this as soon as our Christmas orders are out of the way. I would also hope Chariya's group will be run like a cooperative. 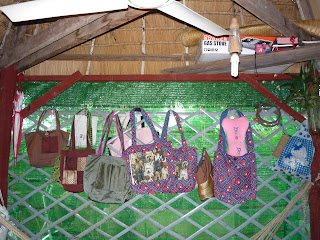 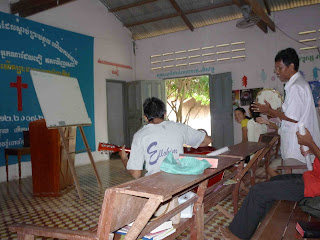 I then ended up giving a talk at the Methodist church here in Siem Reap. Susan and Pat wanted me to share my experience as a business person and as an employer to a group of young Cambodians who attend this church. They were doing a project on "Life Plans" which I thought was great--you get people to write down all the important stages of the life thus far and what milestones they'd like for the future. For all the kids, getting a job, marriage and having a family were important--just like people everywhere. Pat and Susan had also bought biscuits and soft drinks and we had a small party after that. 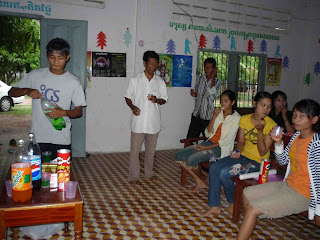