Our house in Phnom Penh 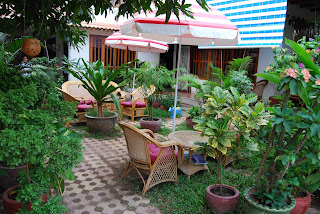 I found these pictures today which brought back memories. This is the beautiful house we rented in Phnom Penh when we first moved to Cambodia. It's on St330, near the Tuol Sleng genocide Museum. It's a 3 and a half storey semi-detached house with a beautiful garden, with grass. Most houses in Phnom Penh have concrete driveways. In that regard they are like Singapore houses, because people cannot be bothered, or don't have the time, to do gardening. Everyone thought we paid more than what we actually did--the Korean man who rented the house just before us dropped by one day and was upset to find out we had paid less than he did! We got it for less than what it would have gone for because we paid 6 months in advance. Also, the landlady was such a lovely lady, she gave me a hug the first time we met. I guess she liked the fact I was here to help Cambodian women. 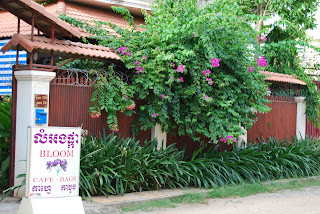 The house was so beautiful, all my friends asked me to open a cafe, which I did! My mother said, "You can't cook, you can't sew, what are you doing opening a cafe and a bag shop?!" Bloom cafe only existed for less than a year, however, as Alan and I decided to move to Siem Reap, for a quieter life. We handed it over and sold all the furniture and kitchenware--including a new, huge fridge that I miss now that ours is tiny--to a group of Singaporeans from Singapore Airlines, who have turned it into a guesthouse/cafe. I was happy to hear Changiville (that's the name) is doing well. It's a beautiful house, and one of the bathrooms is marble! But the beautiful bouganvillea is gone :( 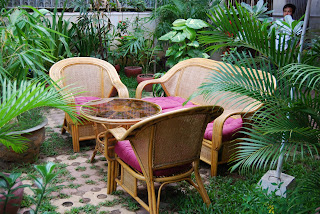 My idea of moving the living room outdoors! So I moved the cane sofa furniture that came with the house in the garden, which was really pretty. Changiville's decor is a bit different now, with small tables--guess not everyone thinks an outdoors living room is a bright idea (imagine moving the furniture every time it rained!) 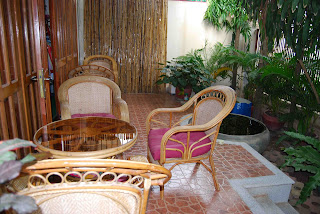 This last pic is the patio, with a small fish pond. We had guppies, goldfish and suckers that my dad bought at a tropical fish shop near the Russian Market.At one time, we combined the workshop with the cafe, so the women were sewing in a room in the downstairs so customers could actually see them at work. Later, the Bloom sewers and Riverkids shared a nearby house, and a few of the older Riverkids girls learnt to sew with the Bloom women. That was a nice set-up. I do miss those days when there were young women and children around. Our dogs Austin and Nessie miss them too because they would spend the day at the workshop and come home at 5pm. Just like day care.
Posted by Diana Saw at 2:35 pm