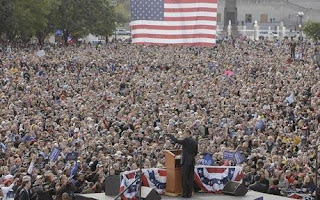 Photo credit-AP
The Huffington Post just did a story: "Obama in Cambodia". HuffingtonPost

"While they may be living thousands of miles from home, working in a poverty-stricken Southeast Asian country, Americans in Cambodia are well aware of this election's significance. As are their friends of other nationalities -- Cambodian, French, German, Australian, Korean. As an American, I am always struck by the amount of attention paid to U.S. politics by citizens of other countries -- we certainly do not return the favor -- and this year, interest is especially keen."

I have to say 100% of the Americans I meet at the shop say they will vote, or have already voted, for Obama. As travellers, tourists are exposed to other countries and cultures and as a result tend to be more open-minded. However, only about 60 million U.S. citizens — about 20% of the population — have passports. USAToday. Sarah Palin herself did not have a passport until late last year.

Much has been said about how insular and ignorant the American population is. I am not in a position to comment as obviously those I meet are travellers or expats (I do recall one incident: On a subway in New York, an American woman asked me where I was from. I told her Singapore and she said she'd been there--"It's in Brooklyn, right?")

But here are some interesting facts:

- According to Gallup polls from presidential election years 1948 through 1972, Americans used to rank foreign affairs as the most important issue facing the nation. Since then, however, with the single exception of the 2004 elections, the economy has been ranked first.

- According to a report funded by the US Department of Education,in 1965, more than 16 percent of all American university students studied a foreign language. Now only 8.6 percent do.

- On television, both the number of American network news bureaus overseas and the amount of air-time spent on foreign news fell by half in the 1990s.

Quoted from this article Yale, whose author tries to explain"Why are Americans progressively tuning out the rest of the world? The reason is twofold. But both confirm the cherished belief of most Americans: that their country is a 'shining city on the hill.' And the rest of the world has relatively little to offer."

More recently I read this article in the Guardian, "How these gibbering numbskulls came to dominate Washington" (what a great title) on the degradation of intelligence and learning in American politics and how it came to be this way. The Guardian

I actually wonder how McCain would feel if he won--how would he feel when he has to recognise that one factor (if not the biggest factor) he got in was due to race. I also wonder, like these guys, if there will be riots if McCain wins: TelegraphUK
Posted by Diana Saw at 2:47 pm

It's an interesting time. I'm surprised and pleased to see such a high level of interest in the USA election.
http://jinja.apsara.org/index.php/2008/11/motodop-moment