Thailand-one of the 20 world's most dangerous places? 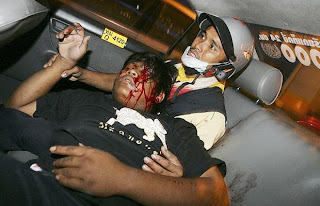 Following the terrorist attacks in Mumbai, the UK's Telegraph newspaper showed in photos "20 places which are among the most dangerous places to visit on Earth". The picture above is Thailand, image number 6 on the Telegraph's slideshow.

The Telegraph puts Thailand up with Iraq, Afghanistan, Sudan, the Democratic Republic of Congo and Palestine. This is their reasoning:

"Major political demonstrations and a temporary state of emergency have affected both of Bangkok’s airports. The area around Government House and nearby Ratchadamnoen “Nok” Road, including the area around Metropolitan Police headquarters and Parliament should be avoided. Fighting also broke out last month on the Cambodian border at Preah Vihear and tensions remain high. Civil unrest and frequent attacks continue in the southern provinces of Pattani, Yala, Narathiwat and Songkhla – the Foreign Office advises against all but essential travel to these areas."
Posted by Diana Saw at 2:27 pm