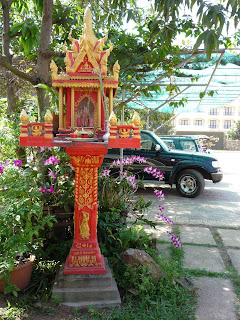 Hok Lundy's family plans to buy the area where the helicopter crashed and killed the Cambodian police chief, reported the Phnom Penh Post. They are doing it to "guard his spirit".

The 90x80m vegetable plot in Svay Rieng province is owned by the mother of Keut Sophy, the chief monk of the nearby Svay Chek pagoda. The monk is asking a hefty USD150,000 for the "haunted" vegetable plot. Listen to this:

"At night I would dream about a dark magician from Svay Rieng town coming to use magic on my family's land," he said.

"One night I invited seven monks to bless the village, and then the next day Hok Lundy had his crash."

Locals believe the family will pay whatever the price because said one: "Khmer people believe that when someone dies, their spirit remains in that place."

The Khmers are a very superstitious people. Our former housekeeper Navy used to tell me our house is haunted. The basis for her belief? Our dog Austin whines when we leave the house. "But when I look outside, there is nothing there. Your dog sees ghosts and that is why he cries," she said to me in Khmer.

I tried to explain to her Austin--and only Austin, out of the five dogs we have--whines because he is attached to us because he is our first dog. He grew up with us as playmates, as his pack, since he didn't have any other dogs to play with. But of course Navy prefers her explanation.

The husband of one of the Bloom women killed their two sons, the water buffalo and then himself, all in one day. When you ask Khmers why, they say it's because he was possessed by an evil spirit.

A more scientific explanation is he was suffering from some mental illness--depression, schizophrenia, etc. But none of the Bloom women believes this.

At the Bloom cafe once, I met a very kind Cambodian man who lived for 30 years in Paris where he worked as a doctor. Now that he is almost 70, he has decided to return to Cambodia to help his people. He visits the countryside every weekend to meet with sick people and dispense medicine. He told me that many, many people in the countryside are mentally ill. They are depressed from the war (post-traumatic syndrome) and from the inability to make a living after the war. You have to remember that some of these people have suffered for years, through the Khmer Rouge, civil war, and continue to suffer even in times of peace as they struggle to feed their families.

I remember reading that doctors in California know of 150 Cambodian refugee women who went blind during the Khmer Rouge period. They were so overwhelmed with pain their minds just blocked out any more images, as reported by this New York Times article.

What compounds the problem is the absolute dearth of psychological help for the mentally ill. Where can the average Cambodian go for help if he or she is depressed? Turning to drink to cope is probably the most popular way. In Phnom Penh, young men who go to the city from the countryside in search of work, but who fail, turn to glue-sniffing to stave off hunger. Sometimes they die from starvation on the streets.

I remember seeing this naked Cambodian man who was standing on a road divider in Phnom Penh. He was stark naked, "a mad man", said the Cambodian friend I was with. He was so lost, yet there is no one to help people like him. When I moved to Siem Reap I used to see this man, perhaps in his 50s, filthy, with matted hair, roaming the Old Market Area. He disappeared about 6 months ago. I asked what happened to him and learned he was Thai and had been here for years. Then he vanished just like that. No one knew what happened to him or where he went, and no one cared.