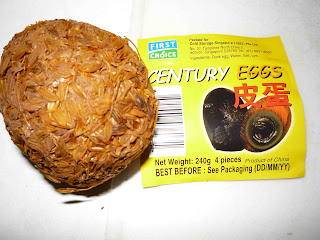 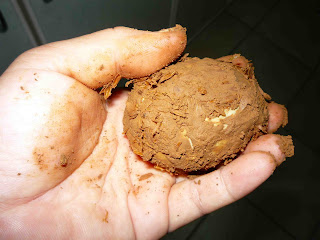 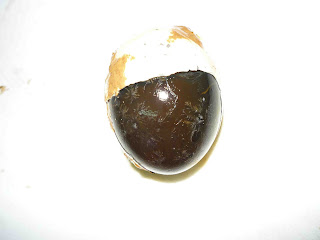 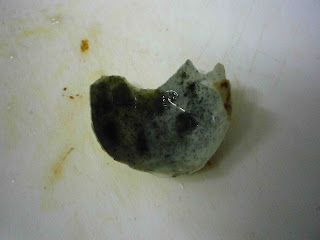 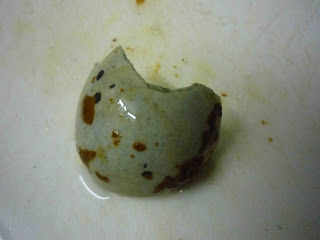 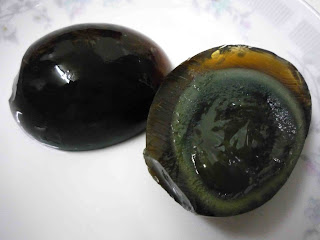 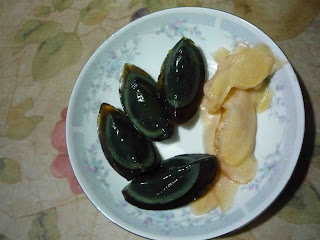 I took these photos at home when I had century eggs. I love to eat these and mom bought a packet of 4 for me. You can't get this in Cambodia.

This must be one of the weirdest foods in the world. Century eggs are also known as preserved eggs, hundred year eggs or thousand year eggs. From wikipedia: "These are duck eggs that have been preserved in a mixture of clay, ash, salt, lime, and rice straw for several weeks to several months. After the process is completed, the yolk becomes a dark green, cream-like substance with a strong odor of sulphur and ammonia, while the white becomes a dark brown, transparent jelly with little flavour or taste. The transforming agent in the century egg is its alkaline material, which gradually raises the pH of the egg from around 9 to 12 or more. This chemical process breaks down some of the complex, flavorless proteins and fats, which produces a variety of smaller flavourful compounds. Some eggs have patterns near the surface of the egg white that are likened to pine branches." (click on the third photo and you can see the crystal patterns.

The fourth shows the inside of the cracked egg shell. You can see spots of black. The next one is the outside of the egg. The egg cut in half. The yolk is dark green and a bit runny and tastes weird, exactly like ammonia and sulphur but is strangely tasty. It's sometimes too strong, so people take it with vinegar preserved ginger (that's the stuff next to the egg in the last pic).

Yes, yes, I know. It's most bizarre. I myself can hardly believe I eat such things, but it tastes good. But I think it is an acquired taste. I remember not liking it as a child (like durian), but now I love it. It seems the Chinese used to wrap the eggs in the clay mixture to preserve the eggs in times of plenty. How they came up with the bizarre formula beats me.
Posted by Diana Saw at 12:52 pm

haha Kerri, now you know why i can eat tiny shrimp heads just like a Khmer. :)

This has definately peaked my interest...Im out to find one now!!