Ushering in the new year in Siem Reap 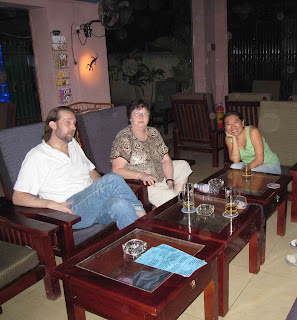 New Year's eve was spent in town for the first time since we moved to Cambodia. Alan and I are not party animals and have always spent NYE at home with beer, wine and the dogs. We play loud music and have our own party. That night, however, after dinner at For Life restaurant, we bumped into Sharon and Don, the parents of Matt, the American owner of the Giddy Gecko. That's Matt, Sharon and me. Don is not pictured cos he took the photo, and Alan was cropped out because he does not like being on my blog!

If you've not been to the Giddy gecko, you must! It's just behind Cambodia Soup Kitchen and opposite Real.Khmer.Cook on route to The Lane. South of Pub Street is known as"the Alley" and North of it is a new street called "the Lane". I prefer the Lane because Pub Street and the Alley are full of tourists and the Lane's much nicer for a quieter evening. The Lane's other residents include Miss Wong's, a classy joint owned by New Zealander Dean and "The Rock" a disco popular with Cambodians - and of course, our favourite little restaurant "For Life", where the mom does all the Khmer cooking. New bars have opened up on the Lane, one called M.I.A. bar and Pub Street's Khmer Idea restaurant has expanded to the Lane as well. 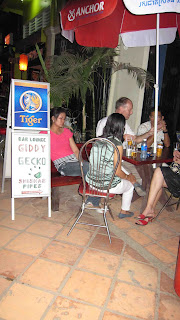 Apart from Matt being a fascinating character (he's worked in Afghanistan, Singapore and other far-flung places), The Giddy Gecko the only place in town that has shisha, also known as hookahs, you know, that bong-like thing which is really a water pipe you smoke from. We were lucky to get there at 10pm cos the place started to fill up and we even had to share tables.  This was the reason why: 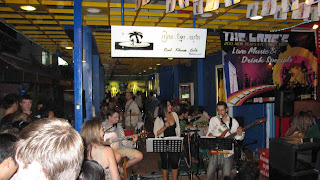 A live band was due to start playing at 11pm. But there was a lot of faffing about and the music did not start till closer to midnight, making a few of us wanting to shout: "Give us something we can dance to already!" This is the first time I've seen a live band since moving to Cambodia so it was something of a treat. I am not sure who the band was, as I did not catch the introduction - not even sure there was one. But I think they were Cambojam, a well-known Western band with a female singer. They were professional musicians - you can tell they've played with each other for a while - everyone was so comfortable and in tune with the others. They're not short of cash either: think we spotted a Fender Stratocaster and a Lowden. I thought the drummer was really good, as was the rhythm guitarist, but the sound system (or the repertoire) failed the singer. When they started playing I told Alan, what's the bet U2 will be among the songs? I was right (It was "With or without you"). It just seemed like that sort of band. But they were good musicians, just that many of the songs were not my favourites. But then I am a weirdo. I like bluegrass, and most bands are jazz/blues types. 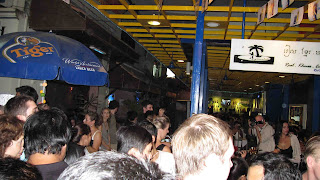 Nonetheless they brought in the crowds and after mid-night it got really crowded. Many Cambodians started filing in as well and Thyda and Nara told me they was there till after 1am, as were we, but we failed to see each other among the crowds. 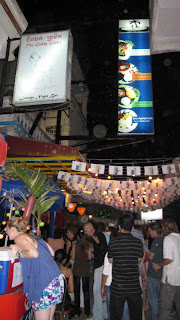 Party at "The Lane" - all the bars were doing brisk business selling plastic cups of draft beer for US$1 to the revellers. The Lane was less noisy than Pub Street, and as I said, the live band was a treat. But if "Boom Boom Boom" and drunk tourists is your kind of thing, the place to be was Pub Street.

And a great evening was had by ALL. Also our first experience with street party to usher in a NEW YEAR. Of course we love to go to the GIDDY GECKO !! s & D

Glad you enjoyed the Giddy Gecko! I am very proud of my brother Matt!

Mark and Ro - too bad you were not here to help the NY celebrations in the Lane.