Bloom in the Blackberry Bold Ad 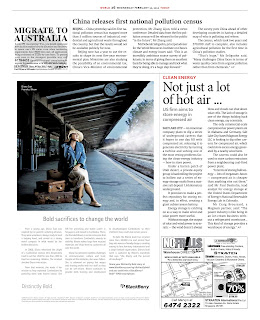 The ad came out in yesterday's "Today" newspaper. I thought the team did a good job and I had a fun time at the photoshoot. I was told to look pensive, and at one point I remember I looked blank and the creative director said I looked like I was about to be hit by a meteor (or flying pigs!), hahaha!

Blackberry was nice enough to give me a Bold (in place of a "talent fee", I suppose, since I'm not quite a talented model) and they are talking to someone from Cambodia's CamGSM to get me set up over there. I used the phone to take photos at Memphis, a nightclub in Phnom Penh, and it had a flash so resulted in better pictures than Heike's (our German customer) iPhone, which doesn't have a flash. I'm still trying to get used to the qwerty keypad though. My thumbs are too fat! By many accounts it is a good phone and I have had five offers for it already :)

The shoot was taken in January and the location is the (only) train station in Singapore, the Tanjong Pagar Train Station. It's a beautiful train station and trains still run regularly from Singapore all through Peninsular Malaysia, even though train travel has become much less popular (the trains kept breaking down is what I remember as a child taking the train to Malaysia to see relatives).

I flew back specially to Singapore at my own expense just for two days for the shoot. I did it because I want to generate awareness about Bloom and our mission: "Help the poor, help the planet."

PS: I wonder if it was a coincidence - the "Migrate to Australia" ad being placed near me, since I am a Singaporean who left Singapore for another country too...!
Posted by Diana Saw at 1:55 pm

This is great! And I love the photol!

Diana Saw said...
This comment has been removed by the author.
11:49 am

I recently came across your blog and have been reading along. I thought I would leave my first comment. I don't know what to say except that I have enjoyed reading. Nice blog. I will keep visiting this blog very often.