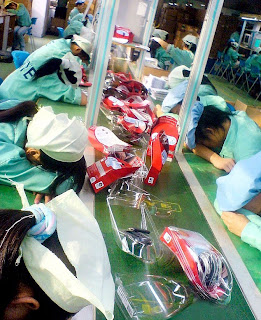 This photo supposedly shows Chinese workers in a factory in Dongguan, China, slumped in exhaustion at their workstations. To be honest, it looks like they are napping to me, the way Cambodians do during their lunch break.

Anyway, this is what the UK's Daily Mail reports (surprising, since it's a right-wing tabloid):

"Showing Chinese sweatshop workers slumped over their desks with exhaustion, it is an image that Microsoft won't want the world to see.

Employed for gruelling 15-hour shifts, in appalling conditions and 86f heat, many fall asleep on their stations during their meagre ten-minute breaks.

For as little as 34p an hour, the men and women work six or seven days a week, making computer mice and web cams for the American multinational computer company.

This photo and others like it were smuggled out of the KYE Systems factory at Dongguan, China, as part of a three-year investigation by the National Labour Committee, a human rights organisation which campaigns for workers across the globe.

Microsoft said it was committed to the 'fair treatment and safety of workers'. A spokesman added: 'We are aware of the NLC report and we have commenced an investigation. 'We take these claims seriously and we will take appropriate remedial measures in regard to any findings of misconduct.'"

Wow, That's messed up, they deserve better work conditions and I hate to say it, but it is a byproduct of capitalism. I wish them well, and anyone going through struggles.