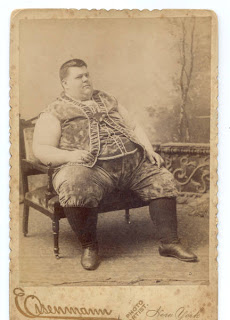 Photo and text from modeledbehaviour.com:


"This is Chauncy Morlan, and around 100 years ago his obesity was so shocking that people would pay money to see him as he toured the country as a circus “fat man”. I find the unremarkableness of his size to be a telling sign of how we’ve pushed the limits of obesity in the past 100 years. Imagine, if you will, what society would look like if 100 years from now if what passed as spectacularly obese today would not even turn heads at the mall."

Michelle Obama brought fat back into the picture with her plans to fight childhood obesity. The US is the fattest developed nation, and Americans consume on average 2,700 calories a day - about 500 calories more than 40 years ago, more than what Cambodians consume today. (Does that mean Khmers are tinier than Americans 40 years ago?)

(Khmers consume 2160 calories daily according to the UN's Food and Agriculture Organization (FAO), which recommends a minimum daily per capita intake of roughly 2,100 calories).

"Beating Obesity" is a thoughtful article on the subject. Written by Marc Ambinder and published in the Atlantic, Ambinder himself was obese, and chose the US$30,000 bariatric surgery. He lost 85 pounds (38.6kg).

"But why did the obesity rate accelerate in the United States beginning in the 1980s, setting us apart from our peers in other developed countries? (Though the Mexicans and the British come close.)," asks Ambinder. "Did Ronald Reagan’s declaration that “it’s morning again in America” prompt us all to start eating bigger breakfasts?"

It's a complicated issue and fat people may be lacking the FTO gene. Which is not to say people do not have a responsibility to try to gain control of their weight.

I for one applaud Ms Obama for having the guts to tackle this issue, because in this PC (politically correct) age, you can be accused of "fattism". Governments can and should do more.

Ambinder writes: “[I]f you go with the flow in America today, you will end up overweight or obese,” Thomas Frieden, the director of the Centers for Disease Control and Prevention, told me when I met him at an obesity conference in Washington last summer. “This does not absolve individuals of the responsibility of trying to get more exercise and eat healthier. But it suggests a synergy between policy intervention and personal efforts to lose weight.”

The US government should also pay attention to obesity because it is costs the country's coffers billions of dollars. According to the Surgeon General the total annual cost of obesity in the United States was $117 billion for the year 2000.

A more recent 2008 study by The Conference Board found the cost to the US economy in lost working days and extra healthcare costs is a US$45 billion a year. Also in today's WSJ Marketwatch: "If you don't lose weight your finances will".

So I wish Michelle Obama well and hope she fares better than the Naked Chef Jamie Oliver did. Oliver  was reduced to tears trying to convince Virginians to eat better.
Posted by Diana Saw at 3:44 pm