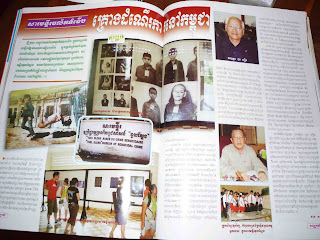 The magazine also has more "serious" articles, like this one on Tuol Sleng or S21, the genocide museum in Phnom Penh. This was one story Thyda did not read, but she told me the headline says the authorities are planning to move the museum. I could not find anything online to confirm this speculation. 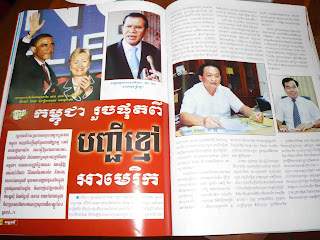 The next one is about politics: the story says Cambodia suffered in the past because it was blacklisted by the US. Because of this, foreigners did not invest in the country. The thrust of the story is Cambodia's resilience and how the country overcame the dark times to become a destination for foreign investment. 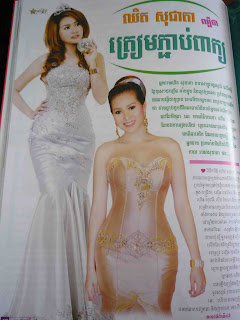 These are photos of a beautiful Cambodian celebrity. I forget if she is an actress or a TV host/compere. Regardless, this celebrity has a travel agency in Siem Reap and is divorced. The story is about her upcoming second marriage. Thyda says this lady has had plastic surgery on her boobs, bum, nose and chin (!). I don't know anything about this celeb or what she looked like before, but I guess a trip to Bangkok and enough money is all it takes if someone really wanted to change their looks in this town. 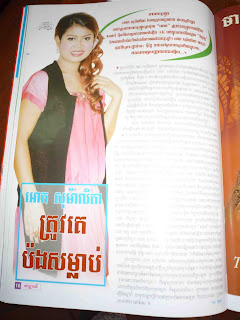 Oh, this story was quite interesting. This lady owns a restaurant and one day a man opened fire in her restaurant over a dispute with the security guard. You can see the words AK in the article and I asked Thyda "are they saying it is an AK47 he used?". She said yes. 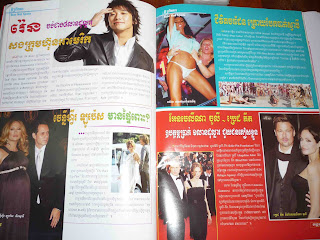 In addition to Horoscopes (many of the Bloom women like to read the horoscope page), you can find global entertainment news. Many young Cambodian women I know think Rain, the Korean singer, is hot, so there he is. Khmers are also keen on Angelina Jolie, since she has a connection with the country (her first adopted son is Khmer). There is also something on Jennifer Lopez's pregnancy. I had to ask who the woman is in the top right and without missing a beat, Thyda said "Jordan, you don't know her?" Sad to say, I do.
Posted by Diana Saw at 1:39 pm