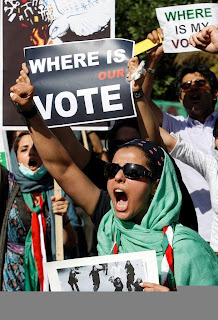 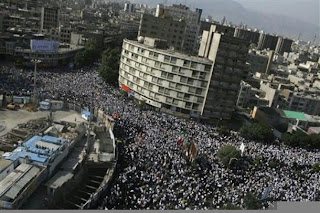 "Each of these two tests provides strong evidence that the numbers released by Iran's Ministry of the Interior were manipulated. But taken together, they leave very little room for reasonable doubt. The probability that a fair election would produce both too few non-adjacent digits and the suspicious deviations in last-digit frequencies described earlier is less than .005. In other words, a bet that the numbers are clean is a one in two-hundred long shot."

I have been watching the Iranian protests on TV. My first thought was Iran is more democratic than Singapore. But that's not true. What it is, is that Iranians are braver. Singaporeans care too much about their property prices to take to the street in large numbers to protest anything, even on government policies that many disagree about.

This is why some people think we deserve the government we get.

I once met a Greek visitor to Cambodia who said while he admired what I was doing, he would never do the same because he does not feel responsible for the Cambodians. They have to fight for what they want, he said. Greece has had a turbulent history, too, fighting the Turks, then civil war, military dictatorship (1967-1974). The country's peace and prosperity only started in the Dec of 1974 when, with a national referendum, monarchy was abolished and parliamentary republic established. His point is the Greek people have had to fight to get what they wanted, and so should the Cambodians.

That may very well be true, but it will take time in Cambodia, since the usual instigators of revolution - the intellectuals - were all but killed off in the Khmer Rouge rule (1974-1979). As for why I, a foreigner, am in Cambodia doing what I do, I have written a lot about it elsewhere so won't go into it here.

Anyway, you can watch this youtube video to see how Iranians are standing up for what they believe in and what it means to take on the state, with all the police, weapons, etc available to it. You can see the courage required to do something like this.

Iranian women are not shying away either. "For days now, I’ve seen them [Iranian women] urging less courageous men on. I’ve seen them get beaten and return to the fray. “Why are you sitting there?” one shouted at a couple of men perched on the sidewalk on Saturday. “Get up! Get up!” New York Times.

This graphic video shows a young Iranian woman who died on the street. I was quite shaken watching this one, and quite shocked at how much blood a human being has. I know it's about 8 pints, enough to fill a bucket, but it's still shocking watching it.

Moussavi may not be any better than Ahmadinejad but that is irrelevant. The point is the people are demanding to be taken seriously. As someone who once had as the tagline for this blog: "People should not be afraid of their government; the government should be afraid of the People" (from the movie "V for Vendetta"), Iranians have my respect right now.
Posted by Diana Saw at 5:31 pm