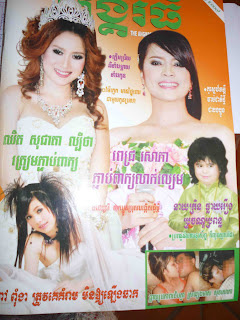 This is the cover of the wildly popular

magazine which was available on newsstands yesterday, the 27th June. Thyda tells me the magazine is sold out within a day. Once she went to 10 stalls to find a copy just one day after the magazine was published but they were all sold out.

The cover always has photos of Cambodian songstresses, actresses and other beautiful, famous, Khmer women. This issue had a scandal (see the bottom left hand corner). A female celebrity was caught on camera with her lover, and Thyda expressed shock because this particular celeb has always had a good reputation. (Female artistes in Cambodia usually have the reputation of being kept by rich men). 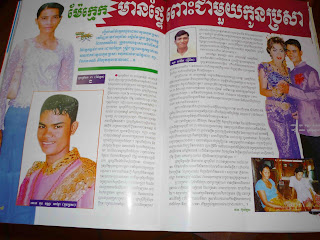 Now we get to the features and you will understand why the magazine is so popular. This story is about a mother-in-law (top left) who slept with her son-in-law (bottom left). The big picture on the right is the wedding photo of her daughter and son-in-law, and the passport sized photo is the woman's husband whom she is divorced from. 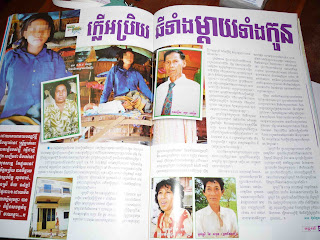 This other story is about a stepfather who slept with his stepdaughter (the one in blue) and got her pregnant. The woman in the smaller photo is the mother. These are just two of the features, I'll upload some others in Part 2.

I can't read Khmer so it was Thyda who explained the stories to me. I kept asking two questions: is it real and where is this? The first one took place in Kampong Thom and the second in Battambang, she said. She got a little impatient with me, thinking it is irrelevant where the incidents took place. "Everywhere in Cambodia it is like this," she said. And every time I expressed scepticism, she would be impatient. "Yes, it is true. Many, many stories like this in the magazines."

Gossip magazines and newspapers routinely make up stories to sell copies which is why I doubt the veracity of these stories. I can just imagine the reporter paying some poor person in the countryside and dressing them up for the story. (Maybe some are even photos of dead people.) How hard would it be to find poor people in the countryside who would be willing to do this for a few dollars? Magazines like Britain's OK and Hello magazines are willing to pay millions for some celebrity's wedding or family pic, because it makes financial sense. The millions translate into a lot more.

The other reason why I think some (not all, some are probably real) of the stories are made up is I am sure the magazine is not even available in more remote, rural parts of Cambodia. So what shame is there in participating in this charade?

Who knows, maybe I am wrong, but it's amazing how the magazine unearths sex stories all over the country three times a month (we're not done yet with this issue's--I have a part 2!). Perhaps luckily for Angkor Thom magazine, Cambodia does have an endless supply to sexual deviants.
Posted by Diana Saw at 4:49 pm