How to cut the grass in your Cambodian garden

We have 5 Cambodian dogs (Austin, Nessie, Sunshine, Buster and Sooty). For this reason, we rented a house with land. We are lucky to have fruit trees, sweet potatoes, beautiful bamboo etc. The only problem is keeping the garden tidy. It is a lot of work, weeding, cutting the grass and overgrown shrubs and trees.

Bamboo is crazy - if you have ever had bamboo you would know it just grows and grows. Also, snakes like to sleep under the bamboo because the shed leaves make a cool bed. I took these photos last year at the very spot - they show a green snake trying to swallow a gecko. There is also a 2 metre black snake which hunts for small animals in our garden, which really freaked out our helper.

I don't mind the snakes. I think they're more afraid of us. The only thing I worry about is the dogs getting bitten because they like to annoy the snakes. Austin once bit a smallish one and swung it around before flinging it. Amazingly the snake survived. Our landlord says the only snake we should be afraid of are cobras (!)

Anyway, snakes also hide in the tall grass, so my mom convinced me we had to cut the grass when it was overgrown. The landlord recommended I hire some Khmers to do it. The cost? USD25 a day for a couple to do the work.

Of course I overpaid. It does not sound like a lot for a foreigner, but you have to remember this is a country where most people earn USD1- USD2 a day. And grass cutting is unskilled labour, using sickles. Indeed, subsequently 3 young men offered to do it for 15,000 riels (USD3.75)--that is in total, not each.

Our landlord is not a mean man, on the contrary, he has been very kind to us. A few months ago, he volunteered to cut our rent because "the economy is bad". I don't think for a second he intended to rip us off. What I think is he was just trying to help his relatives, which is a very common Khmer trait.

Anyway, I also explored the option of buying a strimmer (string trimmer). My landlord picked me up on his motorbike to see the shops, along the road to Psar Leu. There are petrol and electric ones, but you can only get petrol ones in Cambodia, which go for USD90 new (made in China) and USD40 second hand. There is also a Japan made "Honda" that you can get for USD200 new.

The landlord advised me against getting a second-hand one because he said "you pay 40 dollars, but it works only 40%". I find in general, richer Cambodians have an aversion to second-hand things, whereas I always think second-hand because I want to save money. Maybe they are speaking from experience though, who knows?

Usually people use electric ones for their homes, because most people live in a country where land is expensive. Electric ones are not available in Cambodia because land here is cheap and many people own large tracts (our rented place sits on about 16,000 square feet of land).

Anyway, I had a spot of good luck recently. A woman came and asked if she could cut the grass to feed her cows. We had already considered this as a solution: letting in a few cows to eat our grass. Except our five dogs go barking mad when they see the placid creatures (Austin was kicked by one for annoying it).

Here are the photos of the woman at work. You can see curious Sunshine looking on and also how the woman transports the cut grass home, in a basket on her bicycle. She came twice this week. I wonder how many cows she has? 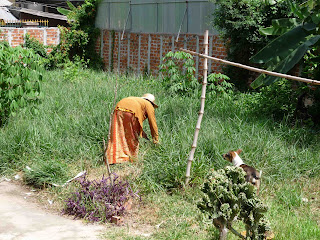 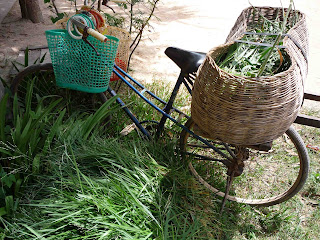