Phnom Penh on fire and Olympic Sponsors under fire 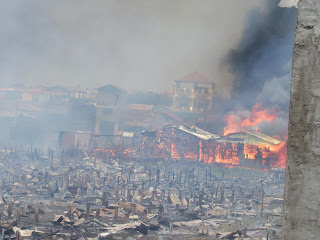 I am now in Kathmandu, Nepal but received this urgent email from Sophon, the director at Riverkids (www.riverkidsproject.org). Please pass this message along and help if you can.

Please find the photos of the a slum area in Phnom Penh had been burned during Khmer New Year. Over 450 houses had been burned and over 1000 people including children are homeless. The rain season starts soon. The people will face much problems,but they get little help from the Government. I really appreciate if you could share little help to those people.

It's the third big fire in Cambodia in 6 months. "In January, a fire destroyed a riverside shantytown in Kampong Chhnang, leaving some 1,500 people homeless. And about 15,000 people, mainly ethnic Vietnamese, were made homeless when fires swept through two squatter camps in Phnom Penh last November." (bbc.com)

I will be back in Cambodia mid-May. On Friday I will be off to Pokhara to visit a Tibetan refugee settlement. Tourists are still barred from Tibet so I am unable to go to Lhasa. I have managed to speak to a number of Tibetans who are living in Nepal though, and will post their thoughts later.

In the face of fresh protests in Tibet, some consumers have already started protesting against the Olympic sponsors. http://www.guardian.co.uk/world/2008/apr/23/olympicgames2008.china?gusrc=rss&feed=media

"In the first signs of a wobble by the Games’ commercial backers after a wave of demonstrations, Coca-Cola, Samsung and Lenovo will not field their logo-covered vehicles as the flame makes its way through Nagano." http://www.timesonline.co.uk/tol/sport/olympics/article3672001.ece