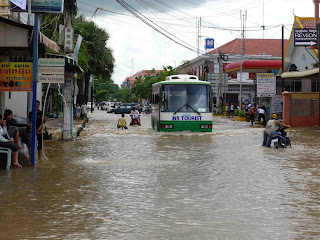 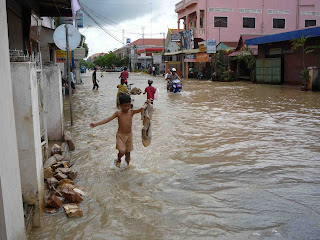 Well, not only did the waters not subside, they have got worse. Central Sivatha Boulevard must be lower than the surrounding streets. It is especially bad at the junction where Hotel de la Paix and Sokimex meets the road to Psar Nge. You can tell how deep it is. The water has risen about a foot from yesterday afternoon. Last night, the motodop would not even take me home that way. We went a long, roundabout way, and I ended up paying twice the fare, which was fair enough, I thought. The water can't be good for the motorbikes. 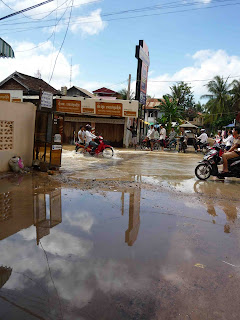 Here's the thing though. Just behind the hotel de la Paix running parallel along Sivatha is a big drain, which was just completed this year. I'll show you the photos in a bit. I am standing on that parallel street, above the drain, taking this photo. The drains run across the whole street to the Night Market on the opposite side of this road. 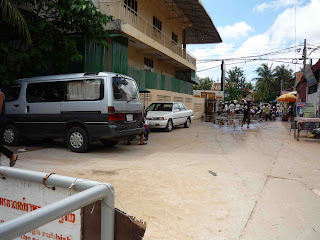 Here you can see the railings around the drain with a bit of the sign, "Don't throw rubbish in the drain". In the background is the same spot where that motorbike was in the previous photo. 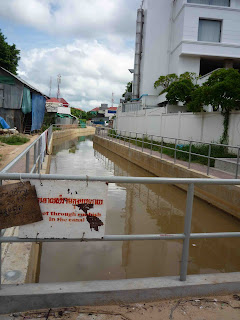 This is the drain. So, if there was a big hole just where the motorbike in the second photo is, the waters would be able to flow into the drain. Instead, where the water is, the drain is sealed. And as you can see, the drain still has some ways to go before filling up. 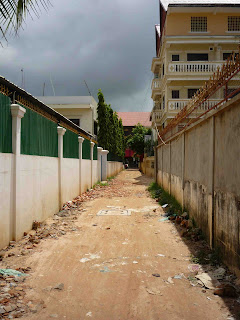 We followed the drain where the land was dry. This is one exit onto Sivatha. It's still dry so far. But as we approach Sivatha, we start to see the water. 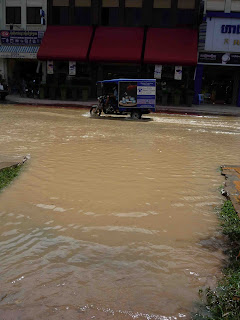 This is Sivatha in front of LuckCafe, Lucky Supermarket's cafe branch. 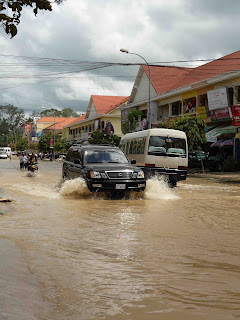 And this is Sivatha just before the Prince d'Angkor hotel. 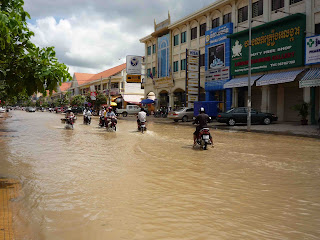 Sivatha boulevard, Siem Reap's main street. I dread going into the Old Market Area. Yesterday, Pub Street was flooded as well. We had dinner at the Alley and the tuktuks were doing brisk business ferrying tourists who did not want to get their track shoes etc wet. My friends told me Ta Prohm temple was completely inaccessible because of the floods. They did manage to visit Angkor Wat and Bayon though.
Posted by Diana Saw at 11:49 am