Just watched a documentary on Animal Planet on the illegal shark fin trade. Sharkwater is an award-winning Canadian documentary by Rob Stewart who exposes the exploitation and corruption of the shark-hunting industry in the marine reserves of Cocos Island, Costa Rica and the Galapagos Islands, Ecuador. He shows how the voracious shark-hunting industry is driving sharks to extinction.

The demand for shark fins in Asia is fuelling this demand. Sadly this practice of eating shark fins has been transported to Cambodia where you can order shark fin soup at some Chinese restaurants in Phnom Penh.

Calling all Cambodians and others - stop ordering the soup! Your demand is feeding an illegal and immoral industry. Sharks are caught and their one and only dorsal fin sliced off and the sharks themselves are thrown back, alive and breathing, into the sea. Without the dorsal fin, the shark sinks to the bottom of the ocean where it dies a slow death by drowning.

Why do the fishermen not keep the whole shark? The reason is simple - money.

It is expensive to provide storage space for the giant sharks on fishing boats and financially more profitable for the fishermen to just take the fins. It's an incredible wastage. And for what?

1) Shark's Fin is tasteless. (Most people just like the taste of the crabmeat and the seasoning they put into the soup)

3) It is ridiculously expensive at US$100 in some places for a bowl of the soupy stuff and up to US$1300 for a shark fin - why would you want to help these people get rich? The fishermen, middle men and restaurant owners are all laughing at you - how easy it is to make money out of stupid, unthinking, people.

4) You can even get mercury poisoning as a Taiwanese woman found out.

“Mercury will not dissolve in cooking,” WildAid Asia consultant Rebecca Chen Chih-hsiao warned. “It is harmful to the brain and nervous system. Pregnant women should definitely avoid eating shark fin as it can damage the mobility and slow down the development of babies.” Chen said shark fin has more bad than good nutritional value, yet the demand for it has grown over the past 10 years as the delicacy became a status symbol.

As usual these stupid people who chase after "status symbols" do not ask questions, simply following fashion trends (I call them sheep-people because they are just like sheep, following the herd).

Eating shark fin soup is another one of these trends. The dish was just a regional delicacy in Canton, south China, until the late 1980s. I learnt this after joining the Facebook group "Do not serve Shark's Fin at YOUR wedding dinner!" started by a Singaporean Chinese woman (as I am). In Singapore, the dish is typically offered at weddings so hotels can charge you an arm an a leg and some couples imagine the dish makes them look rich since they pay so much for it. It's pathetic, really.

In Singapore, the younger, educated, Chinese population is making a stance against this disgusting "tradition" - I put inverted commas because as Singaporean Chinese, it is clearly not our tradition, since the practice was imported from Canton (contrast this with yusheng for instance). Not that tradition should mean much - why keep superstitious and irrational traditional practices? My favourite no-brainer example here is Sati, the custom of burning a widow upon her husband's death in parts of India. That practice was banned in 1829 by the British but one woman was reported to have committed Sati even as late as 2008.

In April last year a rally was held in Singapore to raise awareness against the consumption of shark fins. A large banner bearing the slogan "when sharks die, the oceans die" was displayed at a nearby park close to Singapore's business district. The organisers said more than 3,800 sharks were caught every 20 minutes to meet global demand for shark fin, pushing many shark species towards extinction. A Reuters report in March 2009 Shark fin out of vogue for young Asians summed up how younger people view the practice.

Despite the efforts, Singapore, along with Taiwan and Spain are the biggest suppliers. Hong Kong is on another level on its own - responsible for handling 50-80% of the world's trade in shark fins. A third of all fins imported to Hong Kong come from Europe, with Spain being the largest supplier by far. Other European countries involved include Norway, Britain, France, Portugal and Italy. Fins have also been found to originate from the coastlines of the US, Belize, Panama, Brazil (and Costa Rica as revealed by Sharkwater.) [More information and photo below on gardenofeaden]. 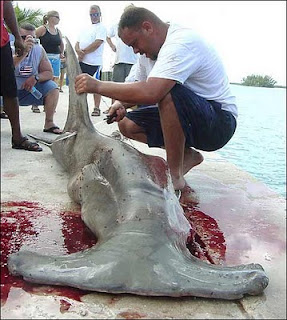 So it was unsurprising to read a report released just 2 days ago by Oceana.org: "Surging demand for shark fin soup among Asia's booming middle classes is driving many species of these big fish to the brink of extinction." Up to 73 million sharks are killed each year, primarily for their fins.


"As a result, some populations have plummeted by as much as 83 percent, prompting the 175-nation Convention on International Trade in Endangered Species (CITES) to consider proposals at its two-week meeting in Doha to regulate the shark trade.

At least eight shark species, including the scalloped hammerhead and the oceanic whitetip, are being considered for CITES listing which would put some controls on their export.

"The global shark fin trade is driving the oceans to collapse," Courtney Sakai, a senior campaign director at Oceana, said in a statement. "Trade measures are the most direct way to ensure that the powerful economic incentives to catch sharks do not lead to their extinction."

You can read the full report here on oceanleadership.org.
Posted by Diana Saw at 9:38 pm

I would also add that avoiding restaurants that have shark fin on the menu is also another way to vote with your dollars. This may make eating out during our upcoming 6 days in Hong Kong difficult but I can not imagine an ocean without sharks.