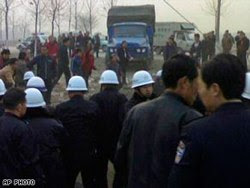 (AP Photo)
I just saw this piece of news. To all those idiots who still tell me it is a free world--wake up and smell the blood.

Chinese Blogger Beaten To Death By Government Officials
98 Comments
by Duncan Riley on January 11, 2008
A Chinese blogger has been beaten to death by Government authorities for the crime of attempting to record a protest on his mobile phone.

When Wei was present at some sort of confrontation or protest by local villages against municipal authorities when more than 50 municipal inspectors turned on him, attacking him for five minutes.

According to CNN, the killing has sparked outrage in China, “with thousands expressing outrage in Chinese Internet chat rooms, often the only outlet for public criticism of the government.”

The Chinese Government has moved swiftly to detain those involved, arresting 24 municipal inspectors whilst investigating more than 100 others in relation to the incident. Notably (for China) the story was published by the official state news service Xinhua, in what is believed to be an attempt to head off dissent over the mater by demonstrating that the Chinese Government does not condone those involved in the beating.